Sandra Bullock may make history Oscar weekend March 7 by winning both a Razzie and an Oscar. If Bullock wins both, it would make her this year’s best and worst actress! 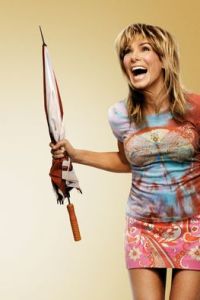 We all know what Oscars are, but for those not familiar with the Golden Raspberry Awards (aka the Razzies), they are the annual awards to dishonor the year’s worst “achievements” in film. They take place the night before the Oscars.

This year marks the 30th anniversary of the Razzies, which will be held at 7:30 pm on Saturday, March 6.

With 2010 Oscar nominations announced this morning, it’s no surprise Bullock was nominated for her work in The Blind Side, which dominated the box office and helped make her the year’s top performer.

“I think it’s just so big that, maybe when I am about 74, I’ll have that moment in a grocery store with my walker and go, ‘Oh, my God! This year has been mind-blowingly amazing!'” Bullock told Us Magazine.

While she’s a favorite for her work in The Blind Side and was clearly Hollywood’s darling in 2009, she’s also been slapped with a double dishonor. The film she produced last year, All About Steve, is up for Worst Film, and she’s up for her own dishonor, Worst Actress, in the poorly received comedy.

Bullock will battle Beyonce (Obsessed), Miley Cyrus (Hannah Montana: The Movie), Megan Fox (Jennifer’s Body and Transformers: Revenge of the Fallen) and Sarah Jessica Parker (Did You Hear About the Morgans) for the “win.” Many are hoping she’ll break a record with the first back-to-back razzle/dazzle by becoming the first actress to take home first a Razzie, then an Oscar.

As a side note, All About Steve is up against Land of the Lost, Transformers: Revenge of the Fallen and GI Joe: The Rise Of the Cobra — while there are three special 30th Razz-versary categories for the Worsts of the Decade.

Ben Affleck, Eddie Murphy, John Travolta, Mike Myers and Rob Schneider are competing for the title of Worst Actor of the Decade, while Madonna, Paris Hilton, Lindsay Lohan, Mariah Carey and Jennifer Lopez duke it out for Worst Actress of the Decade. As for the Worst Films of the Decade, those honors belong to Battlefield Earth (2000), Gigli (2003), I Know Who Killed Me (2007) and Swept Away (2002).