While all eyes are supposed to be on the battle between the Colts and the Saints at the Super Bowl, many of us are just as excited about the big performers set to take the stage and the Hollywood faves sure to be in the stands.
Warning: get_headers(http://www.sheknows.com/articles/812120): failed to open stream: HTTP request failed! in /Users/cristiangraziano/Desktop/HTML_Cleanup_Articles/post_tidy_cleanup.php on line 275 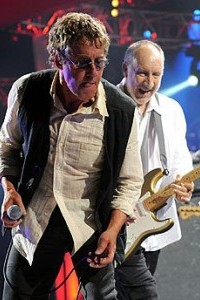 Super Bowl XLIV will
kick off with Carrie Underwood singing the national anthem and Queen Latifah performing America the Beautiful, while The Who is set to
rock the half time with a medley of their hits.

“We’re kinda doing a mashup of stuff,” guitarist Pete Townshend told Billboard. “A bit of Baba O’Riley, a bit of Pinball Wizard, a bit of the close of Tommy, a
bit of Who Are You, and a bit of Won’t Get Fooled Again. It works — it’s quite a saga.”

Townshend promised the performance will be festive, and CSI fans are sure to enjoy hearing all the theme songs from the franchise!

Meanwhile, cameras are sure to give some attention to the celebs in the stands. Kim Kardashian will be on hand to root on her main squeeze Reggie Bush, but contrary to reports from TMZ,
she will not be riding around Miami in an armored Vault XXL2 Limousine.

Taylor Lautner, who made it out to the Colts game on Sunday with exiting Brothers and Sisters star Rob Lowe, is sure to have a seat at the big game — since Lautner will been in town for the DIRECTV Celebrity Beach Bowl anyway.

Kevin Dillon, Christian Slater and Chace Crawford will also compete in a celebrity flag football game, so they look for their faces in the
crowd at the Super Bowl.

Famous Miami “local” Sean Diddy Combs is sure to be in attendance, having tweeted that he’s hosting a big Super Bowl party after the game. SheKnows will have coverage of the pre and post game
parties, not to mention the Super Bowl red carpet and a closer look at those fantasic Super Bowl commercials!

Let the games begin on February 7.

Read on for more superbowl