The nominations for the 82nd Academy Award were announced in Los Angeles with a few shocks. Kathryn Bigelow’s The Hurt Locker joining Avatar in leading the Academy Award nominations pack with nine each — now that was a pleasant surprise!

Live from Hollywood, the Academy Award nominations were announced by Academy president and Oscar-nominee Anne Hathaway. One question about the expanded 10 film category Best Picture was answered. Would the Academy use the extra 5 spots to nominate blockbusters that miss the nomination mark each year such as Star Trek and The Hangover?

That would be an absolute “no.” With double the amount of films in the Best Picture category, Oscar decided to pay tribute to such films as Ethan and Joel Coen’s A Serious Man, An Education and Precious.

Sure, Avatar is the box office champ and was nominated for Best Picture while nominees The Blind Side and Up were commercial and critical successes — and both received nods for Best Picture. But overall, the sentiment from the Academy was to use their extra 5 ballot spots to reward great achievements in film such as Peter Jackson’s District 9.

As for the actors, our favorite, Sandra Bullock received her first nomination for The Blind Side while Meryl Streep continued her record-setting nomination count with another for Julie and Julia. And Precious continued its award season bounty with actress nods for No’Nique and Gabourey Sidibe.

Without further ado…the nominations for the 2010 Academy Awards! Stay with SheKnows Entertainment throughout the award season and live from Hollywood as the Oscars are awarded March 7.

Best motion picture of the year 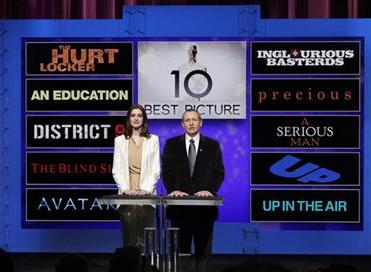 Performance by an actress in a leading role
Sandra Bullock in The Blind Side
Helen Mirren in The Last Station
Carey Mulligan in An Education
Gabourey Sidibe in Precious: Based on the Novel Push by Sapphire
Meryl Streep in Julie & Julia

Performance by an actress in a supporting role
Penelope Cruz in Nine
Vera Farmiga in Up in the Air
Maggie Gyllenhaal in Crazy Heart
Anna Kendrick in Up in the Air
Mo’Nique in Precious: Based on the Novel Push by Sapphire

Best animated feature film of the year
Coraline
Fantastic Mr. Fox
The Princess and the Frog
The Secret of Kells
Up

Achievement in film editing
Avatar
District 9
The Hurt Locker
Inglourious Basterds
Precious: Based on the Novel Push by Sapphire

Adapted screenplay
District 9
An Education
In the Loop
Precious: Based on the Novel Push by Sapphire
Up in the Air