Sure, on the Grammy red carpet all the buzz is speculation about who will win the album of the year or of course, who the stars are wearing. But for the star of When in Rome, Kristen Bell was all about the bling on her finger! 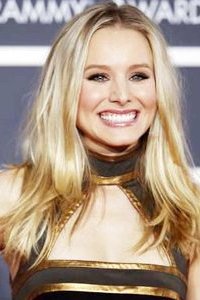 Bell and her fiance, Dax Shepard, actually got engaged over the holidays. The couple began dating in early 2008. In an interview recently, Kristen described their
relationship on set as competitive. She informed Women’s Health magazine, “We were trying to one-up each other,” she said. “That’s what we do at home, too. It’s like, wait —
watch me do this funny bit. No, watch me do this funny bit!.”

In a case of art not imitating life, in her new flick When in Rome, Kristen’s character is an ambitious New Yorker who is very much so unlucky in love. Sharing the screen with
co-star Josh Duhamel (Fergie’s hubby), she finds herself being pursued by several suitors only after stealing their “wish” coins
from a fountain during a whirlwind trip to Rome.

It looks like Kristen’s career continues to rise as a few more flicks will be released in 2010, namely Burlesque and You Again.

Interestingly enough, the star of Veronica Mars got her start in theater on the Great White Way. Kristen graduated from New York University’s prestigious Tisch School of the Arts, where
she studied musical theater. She made her Broadway debut in The Adventures of Tom Sawyer.

Read on for more Kristen Bell

Kristen Bell talks When in Rome