SheKnows: Let’s talk about Savannah. She’s a kind of complicated young woman. How do you see her?

Amanda Seyfried: I saw her as a girl who actually knows herself pretty well at her young age of 22. She’d had this strict upbringing. She’s very wealthy yet she doesn’t put on any airs. She’s cool. She’s special. She’s really smart and strong. She’s a good role model I think for young women and I think that’s why she was written that way.

SheKnows: She evolves a lot throughout the film. Was that a challenge? 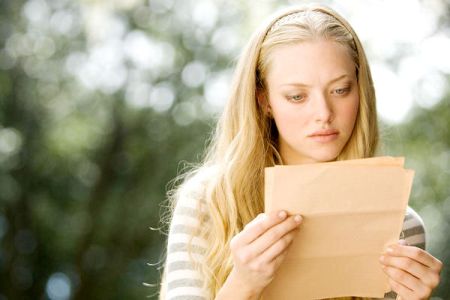 Amanda Seyfried: I was excited because, in the beginning of the movie you see this girl who is so clean of any issues really. There’s nothing weighing her down in her life and that’s so nice to play. Then you have this turn and you can see someone who is so levelheaded, balanced and open-hearted go through something so devastating. That was more the challenge. It’s funny because it’s really hard to play characters that have deep, deep-rooted issues because I can’t connect to that. I love playing people I can’t connect to because it’s all the more challenging. She went through a situation that changed her forever.

SheKnows: Could you ever personally break up with someone on an e-mail or in a letter?

Amanda Seyfried: No I couldn’t. I’m thinking back on my relationships and those relationships weren’t the type where you can just do that. I think it’s kind of cowardly. Yeah, maybe she could have called but I know what it’s like. If you’re in love with somebody, you don’t want it to end but it has to. Hearing somebody’s voice, it’s something that could have completely just broken her down.

SheKnows: Previous Nicholas Sparks books have done really well when adapted for movies. Are you a fan of Sparks’ work and have you seen the other films like The Notebook?

Amanda Seyfried: Yeah. The Notebook blew my mind. I think it blew a lot of people’s minds. It feels so good to watch two people fall in love and be in love that passionately and it feels even better to play it and to give that to (an audience). Sparks’ work is powerful and that’s why I think we get so sucked in. He’s a man writing these sentimental love stories and that’s kind of fascinating too. 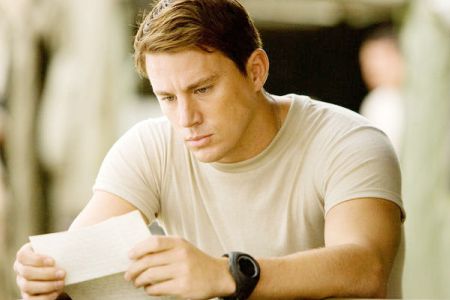 SheKnows: What other love story films have inspired you?

Amanda Seyfried: I love to watch movies. Love stories always inspire me whether I’m in love or not. The chance to play this romantic lead was like a dream. My role models were Claire Danes and Leonardo DiCaprio (in Romeo and Juliet). When they fell in love, that’s when I fell in love with movies and when I realized I wanted to be Juliet. I think every young girl dreams of being Juliet. Thank God for that movie or honestly, I wouldn’t be here.

SheKnows: You served time on the soaps. A lot of people who work on them say they teach an invaluable discipline that stays with you.

Amanda Seyfried: Memorization and pressure and time. It is invaluable. You have no time to learn thirty pages of dialogue and your brain just gets used to it so quickly and you never lose it. Movies you shoot maybe four pages a day. On a soap, a whole day’s work is like eighty or ninety pages. I can’t believe I was able to do that. But, if I had to go back, I could. It’s so fast and you have to connect to these characters so quickly. I think that’s a good foundation for any actor.

SheKnows: What’s with you and letters? You are acting in Letters to Juliet but they aren’t your character’s letters? Can you catch us up?

Amanda Seyfried: She finds letters. I play a woman who is in a more mature situation than Savannah starting out in this movie. She is engaged to be married and they go on a pre-honeymoon in Italy. People go to Verona to see the statue of Juliet. That’s the epicenter or Verona which is where I stayed. In our movie, people send letters and post letters on the wall. I’m intrigued when I find this really, really old letter that no one found and I write back to it and it gets to Vanessa Redgrave’s character and she flies in and is like ‘I’ve come here to thank you for writing back. It’s inspired me to find this man that I was in love with when I was 15’. She went back to England and married a guy and had children but she’s never forgotten this one man. Of course, the love of her life is played by Franco Nero (with whom Redgrave had a real life relationship after filming Camelot together.)

SheKnows: Very romantic. But are you now worried about getting typecast as the romance girl?

Amanda Seyfried: I have a very heavy, psycho thriller coming out called Chloe. It’s been in Toronto and various film festivals and is now being released by Sony. It’s coming out between the two romantic films so there will be a little bit of shake up, thank God.