Amanda Seyfried first achieved note as a beautiful, petite, blonde actress in 2004 when she played a ditzy high-schooler in the popular Tina Fey film Mean Girls. Seyfried proved she could sing as we watched the musical Mamma Mia and loved her portrayal of a vulnerable bride trying to find her birth dad. In the new romantic film Dear John, based upon the novel by Nicholas Sparks, Amanda sings her own composition and plays guitar.

We had a cozy chat with Seyfried in Beverly Hills and were jealous when the lovely young woman appeared in a sleeveless, black and white checked Alexander McQueen dress with black belt. “I got it off the rack and it fit like a glove.” We should be so lucky. Her, gorgeous, very high black Brian Atwood pumps were evidently not the most comfy. “He makes the most incredible shoes for women but I’ve gotta say it’s not easy (laughs). Not easy being me.” 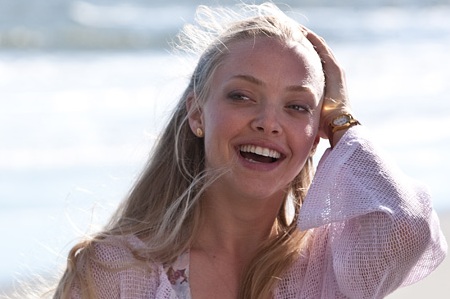 Seyfried sat back and relaxed for some serious girl talk about her chemistry with friend and Dear John romantic lead Channing Tatum, fun with the cast and her boyfriend Mamma Mia’s Dominic Cooper off set in Charleston, South Carolina, Seyfried’s soap opera roots (she was on both As the World Turns and All my Children), the romantic film that first inspired her to act and we wanted to know if the actress has ever broken up with a boyfriend in a “Dear John” letter. Let’s dish….

SheKnows: We hear that even though director Lasse Hallstrom wanted you for the role of Savannah, it wasn’t a done deal, right?

Amanda Seyfried: He wanted me to do it but I had to fight for it. Even though a director wants you, it doesn’t mean that you’re gonna necessarily play the role. I had to meet and do the chemistry read and come back later because they still weren’t sure and we did some readings of some extra scenes. Then it was a done deal.

SheKnows: And how was that chemistry read? Channing is pretty hot.

Amanda Seyfried: (The chemistry) was just there. I think it came from the respect that we had for each other; the fact that we’re almost the same type of actor. On set we both don’t take things too seriously. We like to have as much fun as we possibly can. I think the two of us always have fun on the movies that we make because you can’t get too caught up in anything.

SheKnows: And this is such a serious film.

Amanda Seyfried: Yeah, so as soon as the cameras stopped rolling, we were just fooling around and making trouble. We just literally non-stop fooled around on set; practical jokes. He’s big into that. He learned a lot from Marlon Wayans (on GI Joe). It’s bad but I can’t say I wasn’t involved. I had a great time.

SheKnows: Charleston, South Carolina is a gorgeous city. Did everyone have fun off set as well?

Amanda Seyfried: Charleston’s a great city. There’s a lot of beer and a lot of oysters and a lot of sunshine and it was Fall and so all of us and Lasse frequented Pearl’s Oyster Bar and Magnolia restaurant. That was great. It was a family effort; a family affair too. (Channing’s wife) Jenna (Dewan) was there and my boyfriend (Dominic Cooper) was visiting a lot and it was really nice and easy.

SheKnows: So having the significant others around made sure you two didn’t really fall for each other?

Amanda Seyfried: Even though Channing is so great and so handsome and so funny, I wasn’t afraid I was gonna fall in love with him or anything. Actually, it was easier (with them there). We’re all actors and we know what’s going on. We’re not going to go home thinking about our costar. It’s a cliche for people to fall in love on set. Hey, Jenna did with Chan and I did with Dominic, well, after the fact, yeah, messy.

SheKnows: Guess we won’t get any more info on that?

Amanda Seyfried: (Laughing) It’s funny, you meet somebody and you just click and look how far these relationships have gone. I think, because we’re all actors, it was much easier for our significant others to deal with the fact that we’re playing a love story. And, the fact that the love plays so well on screen that you really believe it. I think it came from deeply-rooted respect and adoration for each other.

SheKnows: Some people call Nick Sparks’ stories melodramatic. Was it difficult as an actress to keep it very real and not slip into melodrama in this film?

Amanda Seyfried: No. The funny thing is, I’ve always been subtle to a fault. I like to be more thoughtful. I’ve always found that some of the words in some of the scripts just kind of get in the way depending upon how things are written. This was a really good script and written well. I didn’t feel like that was an issue. Lasse is very thoughtful and wants it to be realistic. I wasn’t really scared about slipping into melodrama too much. I think the moments where it is kind of overly-sentimental, are okay. You’ve got to have a little bit. 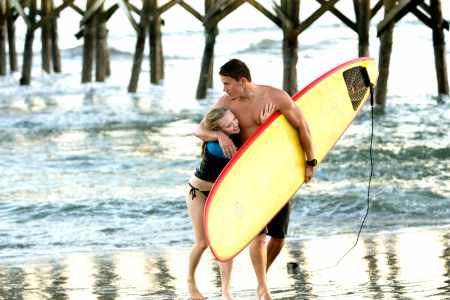 SheKnows: Savannah plays guitar and sings a sweet song in the film. Did you write that?

Amanda Seyfried: I did. I had a piano in my house in Charleston. Every day I’d go home and play. I had a violin, guitar and piano. That’s my wind-down method. I was writing the song. I don’t know what it means or where my head was but, at the end of the shoot, Lasse asked me to bring in my guitar to do a freestyle song for a montage. I was like ‘all right’.

SheKnows: So you singing in the film wasn’t originally planned?

Amanda Seyfried: No. I thought I was going to play something that my ex-boyfriend (Jesse Marchant) sang because we needed to get the rights to it so I called him and I was like, ‘can I quick sing this’? I got on set and I forgot the lyrics (she laughs). I knew how to play a guitar because he taught me when we were together. So I was forced to sing my own song. Then they used it and had me record it in the studio and now it’s on the end credits and the soundtrack.

SheKnows: So you are keeping up the musical side of your career?

Amanda Seyfried: If I can tie it into any movie, sure, I’ll do something. But what I really like is helping out unknown artists. I had this artist Willie Mason come and perform for my birthday. He’s from Martha’s Vineyard and I flew him down. He stayed at my house for a week and he has some great music. He sends it to me all the time.

Up next…Amanda dishes her Dear John character, her affinity for letters and what’s next for this up and coming star.