Rolling Stones guitarist Ronnie Wood is heading to rehab for the eighth time. 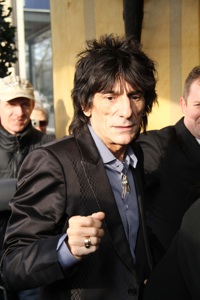 The 62-year-old has had an eventful
couple of years, leaving his wife of 23 years for a Russian cocktail waitress. The couple is believed to have had frequent all-night drug and alcohol binges during their year-plus relationship.
Katia Ivanova and Wood broke up in December after police were called during a violent argument.

Mick Jagger and Wood’s worried daughter Leah have been begging him for months to head to rehab, and Woods has finally given in.

A friend told The Daily Mail, “Ronnie has been in a bad state of mind since his split with Katia. They were in a terrible relationship, but since their break-up he has not been himself. He has been
lonely and drinking and has tried to throw himself into new romances. Jo and the entire family are just happy that he is seeking help again.”

As for having the support of Jagger, the friend said, “Mick has always been helpful and supportive of Ronnie when he gets in trouble and falls off the wagon. The news Ronnie’s decided to go
into rehab is really pleasing for Mick. He has always urged him to get help when he’s had his problems — and this case was no different,” the friend continued.

“Mick’s just delighted he’s taken heed and is trying to get himself straight. They’ve known him a long time and he’s a great mate. They are all like brothers and they just like to look after each
other when they’re in trouble and not threaten one another.”

This is the eighth time Woods has been through rehab.

Andre Agassi admits past drug use