The cast of Jersey Shore has finally come to a contract agreement with MTV to return for a second season. 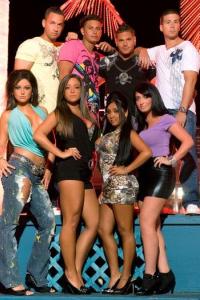 The famewhores have conned MTV
out of at least $10,000 per episode. DJ Pauly D, Snooki Loompa, The Situation, Sammi Sweetheart, Ronnie, Vinny and JWoww will all be back. Annoying Angelina was not asked to return.

MTV says, “Our audience has fallen in love with Jersey Shore and its amazing cast who have really grown together as a family. That
bond gives the show its heart, and we’re thrilled to reunite these friends to bring fans more of what they love — laughs, love, drama and of course, GTL.”

The network originally offered the cast $5000 per episode, but the cast took a note from Friends and stuck together as a group to demand more. The cast of The Hills makes $100,000 per episode, and their ratings weren’t nearly as high as those of
Jersey Shore this season. MTV offered $10,000 and no higher. Still being worked out is how many public appearances cast members can make
outside their official show duties. The cast wants this to be unlimited, because such deals at clubs and events have already proven to be quite lucrative.

So what’s ahead for season two? Definitely a change of scenery. MTV says the show will leave Jersey and head to a new location — but they are not disclosing where quite yet. Jersey Shore
transplanted to Kansas? Nope, still just as terrible.

Read on for More jersey shore

MTV moves ahead with Jersey Shore