NBC kicks off its 2010 Winter Olympics coverage with Truth in Motion: The US Ski Team’s Road to Vancouver on January 30 at 8 pm. We have an exclusive clip!

The documentary was commissioned by Audi as part of their support of the US Ski Team and its hopes for gold in 2010.

Our Truth in Motion exclusive clip follows skier Sarah Schleper who is not only meeting the challenge of vying for a gold medal in Vancouver, but also being the best she can be in her role as mother. 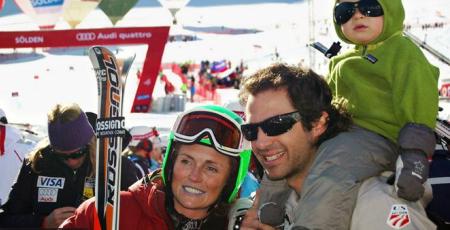 Schleper is a US Ski Team veteran of 13 years and from her family’s home in Vail, Colorado, needless to say she is able to practice quite often. The four-time national champion and a three-time Olympian. Above everything, Schleper’s wish for the 2010 Winter Games is to “have as much fun as possible.”

With husband Federico Gaxiola and their son Lasse by her side in Vancouver, odds are family bliss will ensue.

The Truth in Motion series continues as the days get closer to the opening of the Vancouver Olympic Games. The January 30 broadcast of Truth in Motion: The US Ski Team’s Road to Vancouver gets to the heart of one of the toughest jobs in the world — Olympic athlete — and the road it takes to even make the team.

Follow the team from the mountains of Portillo, Chile to Saas Fee, Switzerland right on up to the FIS Alpine World Cup competition in Solden, Austria that greatly shaped the 2010 US Ski team. Some of the members audiences meet in Truth in Motion may not even make the team. It is that drama that is why the series is so compelling. The raw emotion of athletic dreams is rarely so openly on display.

Here it is, ladies and gentlemen, US Olympic fans of all ages…the SheKnows exclusive clip from Truth in Motion: The US Ski Team’s Road to Vancouver starring one of our favorite gold-medal-seeking moms.

Read on for more 2010 Olympics