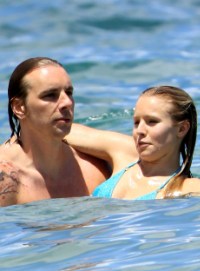 SheKnows: Also, your background in improv and stand up, not just on the Baby Mama project, but on anything you work on — how do you think that’s added
something for you, from your toolbox, as they say?

Dax Shepard: A few good things have come out of that. One being, if you’re improving in a scene and the other person’s improving as well, it really forces you to pay
attention and listen and think about what they’re saying. It sounds very cliche and simple that acting really is just listening, but that gets forgotten on take 25 and you’ve heard the
same sentence over and over again. It’s hard not to stop listening. When you’re improving, you really have to stay engaged so you don’t miss something and I think that brings out
some really good acting. Secondly, I do think that once you get a name for being good at improv, when they have a script and it’s got a small role, and the role’s not really
flushed out, but they know they need it to score — you end up being on a short list of people you know you can just hire.

SheKnows: That’s a really good point, and might I say, you do it impeccably.

SheKnows: And also, in many ways, When in Rome is kind of an ensemble piece with the cast you have. To have your name alongside Danny DeVito and Angelica Houston,
that’s got to be pretty awesome?

Dax Shepard: It’s been a crazy last year and a half in that respect. I did Baby Mama, and it was Steve Martin, Tina [Fey], Amy [Poehler] and Sigourney Weaver. Then I did a small role in this movie with [John] Travolta
and Robin Williams and then those people on this. It’s a very surreal experience to now be working with all these people who I’ve been watching for years in my small town in Michigan.
It’s very bizarre. 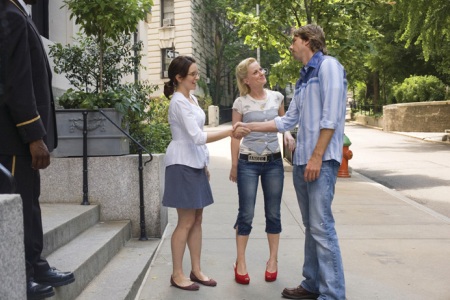 SheKnows: You’re from Michigan too?

SheKnows: I was born in Detroit. I didn’t live there very long, but I always feel I’m from there.

SheKnows: What about you Jon? How was starring opposite legends Danny DeVito and Angelica Houston? 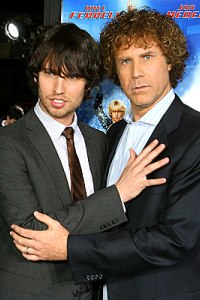 Jon Heder: It’s pretty rad when you’re in the same make up [area], you know, and trailer as them. It was like,
“Wow! Danny DeVito!” Each project I do, there’s always someone in there that’s like, and you know, a veteran, someone who’s been around for so long. Not that
they’re so old! But it’s like they shaped my childhood! I remember watching Danny DeVito in so many films growing up.

SheKnows: What about Kristin Bell? A lot of people know her from many different things. She’s just got such
incredible comic timing.

Jon Heder: Oh, it was easy because it’s the clash of the characters. You have the girl who just doesn’t have time for anything, you know, she’s just really kind
of an intimidating workhorse who’s so committed to her job. That’s the story. She doesn’t have time for love. But she kinda finds this guy [Josh Duhamel] she kinda likes so, obviously, we end up dealing with that. So throw in this really obtrusive, creepy street magician who is the last
thing she needs to deal with! You’re right, Kristin played the character so well. It just makes it more fun.

Up next…who inspires Dax and Jon?