Natalie Portman stole her latest love interest from another woman on the set of Black Swan. 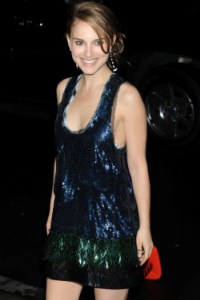 The actress has been dating
dancer-choreographer Benjamin Millepied since the fall, when they met on the set of Black Swan, sources are claiming.

Problem? Millepied was living with another woman at the time: his live-in girlfriend of three years!

A source told Page Six, “They’ve been dating since the fall, although she told friends that she hasn’t gone public with it because she was waiting to see if things got serious. But the
real reason she was quiet about things is that Ben had a live-in girlfriend of three years when they met,” Page Six reported.

“She was a ballerina at the American Ballet Theater. She had been talking about marrying him and was blindsided by the split. She moved out right after New Year’s Eve.”

A rep for Portman said, “We have no comment about her personal life.”

Millepied’s ballet moves have not been rubbing off on Portman. “I’m in full ballet mode right now playing a ballerina in Black Swan,” she said. “I danced until I was like 13, but I
definitely remember being better than I am. I was like, Wow, I was pretty good as a kid. Then I went into ballet class, and I was like, I’m not good at all. I really suck. So it’s been
challenging.”