As several celebs — including Kyra Sedgwick, Kevin Bacon and Steven Spielberg — were swindled by Bernie Madoff in his infamous Ponzi scheme, yet another celebrity has unfortunately been involved in an investment scam. This time, it is 24’s Jack Bauer. 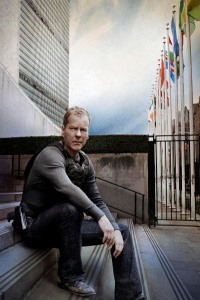 That’s right, 24
star Kiefer Sutherland got taken for almost one million dollars in a cattle investment scam. According to a recent report, Kiefer invested
$869,000 in cattle several years ago but it turned out to be full of hot air.

Michael Wayne Carr is a steer-romping promoter and cattle manager. Apparently he bilked investors out of hundreds and hundreds of thousands of dollars. Among his victims? Kiefer Sutherland.
It’s not surprising to hear about Kiefer’s interest in the “promising” investment; he owns a ranch in Montana and has even entered rodeo competitions.

Although the actor never met Carr in person, he was told by his financial advisor that Carr intended to purchase cattle from Mexico only to resell them at a large profit in America. According to
the district attorney, it ended up being a bunch of bull.

Essentially, Carr never bought the beef and sold cattle that he never even owned.

As Sutherland has been helpful with the deputy district attorney’s investigation, he’s not alone in the scandal. For instance,
a couple from New Mexico lost $177,000 in the same scheme.

It’s anticipated that Carr will be arraigned on twelve felony charges which encompass five counts of grand theft, three counts of forgery, two counts of obtaining money by false pretenses and
one count each of embezzlement and falsifying corporate books. If convicted, he’ll face 18 years in prison.

Kiefer Sutherland gets candid about 24, jail and Mirrors