Reports have the couple calling it quits just days after John Edwards’ admission that he’s the daddy, after all, and days before a tell-all book is set to hit stands. 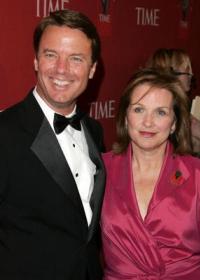 It wasn’t exactly a shocking
reveal when Edwards finally admitted he was the father of Rielle Hunter’s daughter Frances Quinn. While he’s been denying it for years, he confessed to the affair back in 2008.

On the heels of this news and with more unseemly reveals coming out in a tell-all book, word is Edwards and his wife Elizabeth are calling it quits and already living separately.

According to People Magazine, who broke the story with quotes from Elizabeth’s sister Nancy Anania, the split came after Elizabeth met her husband’s illegitimate daughter back in December
and told her husband, “I’ve had it. I can’t do this. I want my life back.”

“It is an extraordinarily sad moment, but I love my children more than anything and still care deeply about Elizabeth,” Edwards said in a statement released late yesterday.

Amid all this, there’s much talk about the upcoming tell-all The Politician: An Insider’s Account of John Edwards’s Pursuit of the Presidency and the Scandal that Brought Him
Down. Written by Edwards’ longtime aide Andrew Young, the book isn’t due out until January 30, but the juicy bits are already hitting the newswire and it doesn’t sound like Young will be
painting a pretty picture of his former boss or Elizabeth Edwards.

Young’s book recounts how the affair with Rielle Hunter ruined Edward’s run for president and how Edwards not only asked Young to claim paternity when Hunter got pregnant, but apparently begged his
mistress to have an abortion. Young also claims to have a sex tape of Edwards and a pregnant woman he assumes is Hunter based on jewelry and timing!

What more, Young alleges that the presidential candidate promised his mistress that after his wife lost her battle to cancer, he’d hire the Dave Matthews Band for their rooftop wedding.

Even more horrifying, Young alleges that the Edwards intentionally used their son’s death to their political gain and Young recently told ABC News’ Bob Woodruff, “Once Elizabeth was diagnosed with
cancer…within 12 hours they were openly talking about how her cancer prognosis was going to help them in the polls.”

Elizabeth Edwards released a statement calling that “unconscionable, hurtful and patently false” and a bigger response came from her publisher, Random House.

“Elizabeth is moving on with her life and wants to put this difficult chapter behind her,” a release from Random house said. “It was an excruciatingly painful period for her and she no
interest in rehashing the past. Based on the limited portions of the book that have been made available, it is clear it contains many falsehoods and exaggerations. She will not engage in a dialogue
on each of the false charges, but would like to set the record straight on two key points. First, the allegation that she sought to politicize her cancer is unconscionable, hurtful and patently
false. Second, she believed Andrew Young to be the father of this child until her husband confessed his paternity to her this past summer. She will have nothing further to say.”

Young’s interview with Woodruff is set to hit the air on 20/20 Friday, while his first live interview airing February 1 on Good Morning America.

Read on for more John Edwards

John Edwards is on our top cheaters of 2009

Unlike John Edwards’ wife, why celebrity wives stay with
their husbands