Simon Monjack believes the Brittany Murphy’s heart attack stemmed from heartbreak over her firing and denies rumors of her drug use and his having taken advantage of her. 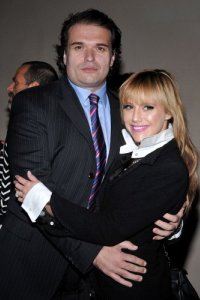 While the
coroner has yet to release a final cause of death, Murphy’s widower claims he has no doubt her fateful heart attack on December 20 was
caused by stress over being fired from Happy Feet.

“She was devastated,” Monjack told Gerald Posner of the Daily Beast. “Warner Brothers relied on conjecture and hearsay about the Puerto Rico film for why they canceled
Brittany’s role in Happy Feet. You’re disposable as an actress or actor.”

That Puerto Rican film set Monjack referenced was The Caller. Just a month earlier, Murphy had lost her role in that film to
Twilight star Rachelle Lefevre, with rumors pointing to her difficult hubby and makeup man Monjack as the cause of the firing.

“Every story needs a villain, and everyone has decided it is me,” Monjack contended. “The reports about the Puerto Rican set are fantasy. I was never, ever drunk there. What I did
do was demand they follow union rules and after she had worked 12-hour days, six days a week, that she get the breaks she was entitled to. I was ‘difficult’ because I was the enforcer
to protect Brittany. She was far too nice to stand up to directors and producers who wanted her to work to exhaustion.”

As for the big story about an unwieldy Monjack being removed from a plane on their return from the set of The Caller on November 29, he scoffed, “It was a mild heart attack. Nothing
to do with drugs. But why should facts get in the way of a good story?”

He also insists Murphy herself was drug free, taking only the prescribed Klonepam for seizures and Sarafem for PMS.

“In all the time I’ve known her, she has never, and I repeat never, done drugs,” Monjack said. “Not a line of cocaine, not a hit from a joint, nothing. She was anti-drugs.
There are no drugs involved.”

In the exclusive interview with Posner, he recounts his last moments with Murphy, and defends his role in their relationships, insisting he was
not a conman taking advantage of a wealthy starlet: In fact, he paints himself more her benefactor.

“Brittany’s films had grossed $100 million before she met me,” he admitted. “But her career had ended before then. She had gone through four or five agents by the time we
met and she had made a lot of indies that went straight to video. She hadn’t earned millions in years, and when we met she was struggling financially, from a series of bad investments. She
trusted some people who she shouldn’t have.

“I spent over a million on her engagement rings,” he continued. “And probably $3 million on clothes. When Brittany died, she had 60 pieces of unworn Louis Vuitton. The dog had
Louis Vuitton. This was all me. We kept our money separate. When I took Brittany out shopping, I paid for everything.”

Monjack goes on to respond to all the rumors about him, denying or explaining away most of them. He admits that decisions like his current move to sue Warner Brothers play a part in creating his
rep.

“I am tough,” he said. “I litigate when somebody does something wrong to me. That’s one of the reasons I make enemies.”

One enemy he didn’t make was Murphy’s mother, who was with Monjack during the interview, interjecting from the background.

“I loved my daughter more than life itself,” she told Posner. “Simon was her soul mate, the love of her life. They don’t understand that in Hollywood because it was
something real.”

The movies of Brittany Murphy