The Runaways has emerged from Sundance as an early Buzz contender for tops of the annual film festival in Park City, Utah. The Joan Jett biopic covering her years in the â€˜70s all-girl group The Runaways finds Twilight’s Kristen Stewart stepping into Jett’s leather pants and creating a heat wave on the frozen tundra of the Sundance Film Festival. 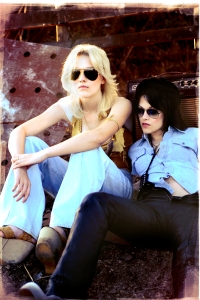 Stewart is joined in The Runaways by fellow Twilight Saga star Dakota Fanning as a fellow band member of Jett’s first rock group.

To say The Runaways were musical and cultural trendsetters would be an understatement.

There were very few all-girl groups after the ’60s pop groups that were making noise on the rock music scene. With the song Cherry Bomb, Jett and The Runaways announced with an explosion that the girls could rock as hard as the boys.

The Runaways were not only one of the first all-girl rock bands, but they were also all only teenagers when their world exploded with fame.

The film follows Jett and Cherie Currie (Fanning) as they rise from the streets of Southern California to rock Gods.

On the way, the ladies of The Runaways meet a rock mentor in Kim Fowley, played by Michael Shannon.

Fowley, on screen and in real life, turned the group into an astounding success beyond what they could have ever dreamed.

Writer and director Floria Sigismondi effortlessly combines music sequences with interpersonal drama that drives any great rock and roll film, The Runaways should do wonders to put the spotlight on the incredible work and legendary influence Joan Jett had on, not only rock music, but also inspiring women all over the world.