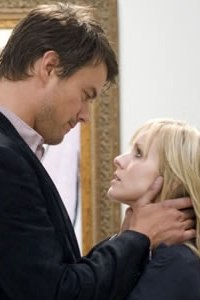 Most women have dreamed of attending
the wedding of a relative or friend and meeting Mr Right who is already in a romantic mood due to the setting and ripe for the picking.

It happens to sweet, petite actress Bell in the new comedy (with romance) When in Rome and she tells us all about it!

If you’ve ever thought you had to choose between work and a relationship, you can identify with the film.

Bell had some things to say about that at our Beverly Hills interview, including tips on friendships, health and beauty, how she avoids stress and the admission that she’s sometimes a klutz to the
point of “bruising like a Georgia peach.”

SheKnows: Kristen, are you somewhat of a workaholic like your character? If you met a guy you like, would he have to be more important to you than your job as an actress?

Kristen Bell: I think your significant other should be way more important than your work, personally. I love working. I don’t know that I’d say I’m a workaholic because I also love
maxin’ and relaxin’ (we laugh). I don’t think I’m a workaholic but currently, I feel like I’m at a really lovely place and I’m grateful to be where I am so I like working too.

SheKnows: Your character’s life is strongly affected by magic in the film but she doesn’t believe in magic or superstition. How about yourself?

Kristen Bell: I’m not very superstitious at all. I never have been. No. I walk under ladders. Who cares?

SheKnows: In the film, you are surrounded by not only gorgeous Josh Duhamel but a bunch of ultra-funny actors [including her boyfriend Dax Shepard]. How was the experience for you
being the straight man to all these funny guys?

Kristen Bell: Being surrounded by those guys is so flattering because they all have a style of comedy that I really envy and I laugh out loud at them often. I was grateful for the
opportunity. I’m glad they had the faith in me to pull it off and I tried to do the best I could. 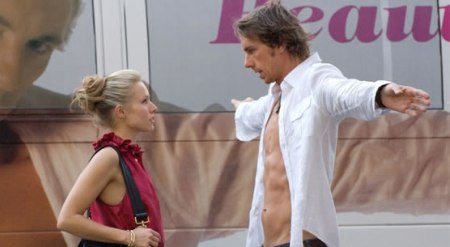 She Knows: Out of all these men chasing you in the film, which type would you pick? The funny guy, the artistic guy…

SheKnows: How did you and Josh build your relationship for a romantic comedy?

Kristen Bell: It’s a difficult thing to capture. I’ve seen a ton of movies where I’ve believed the couple and a ton of movies where I have not believed them at all. Unfortunately,
as an audience member, you check out if you don’t believe them so we knew it was important and I think that’s something you trust your director to bring as well and just capture those moments. But,
Josh and I got along so well from the beginning that I think it was just natural that it read as romantic chemistry because we got along very well in real life. It’s kind of a crap shoot. You have
to hope for the best. You really don’t know until you’re in the editing booth and [the director] figures out whether we captured it.

SheKnows: An audience can definitely feel the chemistry when you and Josh’s character meet in the sister’s wedding scene. Did you feel it?

Kristen Bell: We shot that wedding scene very, very late in the game and we had already established a friendship and so it was much easier to connect immediately and we knew each
other’s rhythms and knew how we were going to play it. Our first meeting was actually the end of the movie shoot and I think the [order] in which you shoot is really beneficial to your actors
sometimes. So, I think we lucked out there.

SheKnows: When in Rome centers on your character’s art world rather than male lead Josh’s world. Is that unusual?

Kristen Bell: Yeah. It’s not the girl chasing the guy which you so often see; the sad, downtrodden girl who is chasing after the guy all the time and revolving around his world and
this was sort of the opposite. Who wouldn’t want all of these guys chasing after them so I thought, “Okay, I’ll do it.” (laughs) 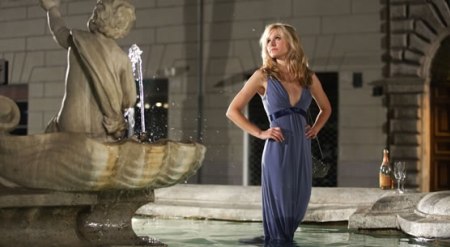 SheKnows: In that wedding scene, you have an hilarious encounter with a vase that will not break. Are you klutzy like that?

Kristen Bell: Yes and no. You have to be the character but, luckily for me, the character was written fairly klutzy. People embarrass themselves on a daily basis. I know I do. This
character did it a lot, which I think makes her likable and also leaves room for a lot of funnies. That vase-breaking scene allowed me to get very physical. I’m very klutzy in real life to begin
with and we just captured that on film. There wasn’t much training or stunt-coordinating going on. I would just trip and Mark [Johnson, her director] would just happen to be rolling the camera and
we put it in the movie.

Up next…Bell blushes about her unwavering friendship loyalty, a Veronica Mars movie(!), that exquisite When in Rome wedding dress and why hiking, for her, is the
best workout ever.