Whip It arrives on DVD January 26 as the directorial debut of Drew Barrymore. The recent Golden Globe winner for Grey Gardens is telling quite a different story with her first directing job. 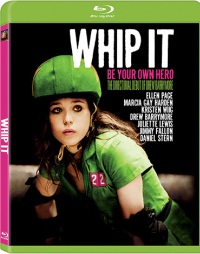 Whip It stars Ellen Paige
(Juno), Barrymore, Kristen Wiig and Juliette Lewis as a group of Roller Derby team of misfits who come together to realize the meaning of the
word “team.”

Page portrays Bliss Cavendar, a girl from small town America who turns her back on her family’s expectations and heads to Los Angeles with dreams leading her way. Seeking to put her life and
career on the fast track, she joins the city’s roller derby team and before she knows it, she is flying fast.

Bliss quickly attains the moniker Babe Ruthless and becomes one of the biggest names in the business.

At the heart of Whip It is a story about the bond between mother and daughter. When Bliss’ mother (Oscar-winner Marcia Gay
Harden) comes to Los Angeles to rediscover her daughter, the two begin a journey of self-discovery and learn new ways to appreciate each other as mother and daughter.

The highlight of the special features on the Whip It Blu-ray and DVD are the deleted and extended scenes. There are eight of them that definitely were fine not being in the film, but
witnessing them on home video is an added bonus to the entire film experience.

Now, without further ado, the SheKnows exclusive bonus clip from the Whip It DVD:

Read on for more Drew Barrymore

Drew Barrymore’s He’s Just Not That Into You interview