John Travolta flew his own Boeing 707 carrying six tons of ready-to-eat rations and medical supplies from Florida to Port-au-Prince, Haiti. 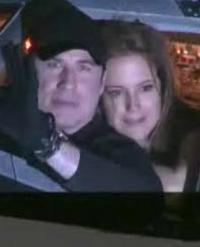 Travolta’s wife, Kelly Preston, was also on board, along with doctors and ministers from the Church of Scientology. “We have the ability to actually help make a
difference in the situation in Haiti, and I just can’t see not using this plane to help,” Travolta said.

In fact, Travolta is comparing the aid relief efforts in Haiti to those of Hurricane Katrina in New Orleans several years ago. As some
celebrities open their wallets, it seems Travolta knows precisely how to get to the heart of the matter. He added, “We were there right away, with this airplane, because, you know,
we have the ability and the means to do this. I think we have responsibility on some level to do that.”

Several aid relief groups have been wanting to fly their own planes into the distressed airport in Haiti, as well.

At least 800 planes with relief items are on the waiting list for the small airport. It can handle only 130 flights each day due to lack of space to park planes as they unload with relief supplies.
In addition, the aid group, Doctors Without Borders, has complained that the flight scheduling priorities of US military controllers who ran the airport created delays in arrivals, which resulted
in several deaths.

When you combine the likes of George Clooney’s mastermind Help For Haiti Now
telethon (which has raised $58 million thus far) with Travolta’s good Samaritan efforts in Haiti, it’s nice seeing celebrities
rolling up their sleeves to pitch in.

Travolta and Preston returned to Florida as soon as their passengers and supplies were unloaded, thereby making room in the airport for more relief flights back to Haiti.