In spite of denials from both Brad Pitt and Angelina Jolie’s reps, rumors are swirling that Hollywood’s hottest couple have gone cold.

The breakup “news” spread like wildfire after a British tabloid ran with the story that Pitt and Jolie had signed the papers to divide their $322 million fortune, not to mention their
time with their six kids. In this version of events, while the kids will bunk with mom, the parting couple will share custody. 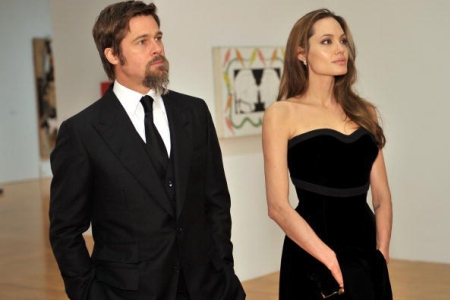 British tabloid News of the World quotes an unnamed source who reveals, “The document was signed in early January. Both Pitt and
Jolie had signed it. The contract was like a tailor-made version of a pre-nuptial agreement except for an unmarried couple’s split.”

The article continues with news that Pitt purchased the manse next door to their home in Los Angeles, and offers racy quotes from Jolie’s
interview with German mag Das Neue.

“Neither Brad nor I have ever claimed that living together means to be chained together,” Jolie reportedly said in the interview. “We make sure
that we never restrict each other.

She also reportedly said, “I doubt that fidelity is absolutely essential for a relationship. It’s worse to leave your partner and talk badly about him afterwards.”

And, “The sparks fly at home if the nice Brad fails to see that he’s wrong and reacts in a defiant way. Then I can get so angry that I tear his shirt.”

Of late, there’s been other talk about the couple, who snubbed the Golden Globes and the SAG Awards this weekend. Jolie also wasn’t at Pitt’s side for the Hope for Haiti event Friday.

US Weekly reported trouble in paradise Friday, The National Enquirer reported a big spat at NYC’s Alto restaurant in early January and word is the couple hasn’t shared a bedroom for at
least a year. Canadian journalist Ian Halperin, who penned an unauthorized biopic on the couple, says Brad has been working on this splits for 6 months and The Sun reported last week that
Pitt’s family has been pushing for a spilt.

With bad news in high circulation, however, reports are out that Brangelina is doing A-Okay.

“It is very false,” gossip blogger Perez Hilton insisted on Early Show this morning. “The interesting thing about how people consume news now is once someone reads something on the
internet; they believe it to be true. That’s not that case.

“A rep for Brangelina has denied it and close sources to them have personally denied it to me – in fact, somebody very close to them,” he continued. “They kind of are bothered by it, but
they’re not really going to go out of her way to set the record straight. They never have.”

According to Hilton, the British tabloid that broke the story is not to be trusted, as they have “a history of repeatedly making up stories or paying for information that then turns out to be
false.”

For all the good deeds and onscreen success this couple can brag of, the press and the fans seem to get the biggest rise from speculating on their relationship. Obviously, this isn’t the first time
Brangelina breakup rumors have run rampant and if the couple is still going strong, it surely won’t be the last.

Read on for more Brad Pitt and Angelina Jolie