With awards season in full swing, the January 23 SAG Awards is all about Hollywood’s biggest and brightest stars — with actors voting to honor the best among them. 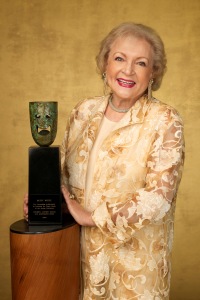 The Screen Actors Guild Awards show is, by its very nature, an insider show, starring our favorite stars.

Unlike the rest of award shows, which honor the respectable but unrecognizable folks behind the scenes who write, direct, produce and score, this night is all about the performers — in other words, the people you’re sure to recognize, which is why People magazine co–hosts that event!

This year’s Lifetime Achievement Award goes to Hollywood darling Betty White, who’s been working since the ’50s. There are sure to be flashbacks to her stints on Password, The Mary Tyler Moore Show, Golden Girls, The Practice, Boston Legal and The Bold and the Beautiful, not to mention some laughs from The Proposal.

Viewers can expect to see the cast of characters from An Education; The Hurt Locker, Inglourious Basterds, Nine and Precious: Based On The Novel Push By Sapphire, which are up for Outstanding Performance by a Cast in a Motion Picture.

While there are always surprises, tomorrow’s winners in the film categories should reflect what we can expect when the Oscars noms are announced February 2.

The dramas up for Ensemble Cast include The Closer, Dexter, The Good Wife, Mad Men, True Blood; and the comedy contenders are 30 Rock, Curb Your Enthusiasm, Glee, Modern Family and The Office — which means the live audience will be packed with stars from those shows.

The show airs tomorrow on TNT and TBS at 8 pm and fashionistas won’t want to miss the red carpet show, which airs at 7:30 pm on TNT.