John Mayer tells Rolling Stone magazine, “I’ve never really gotten over it. It was one of the worst times of my life.” 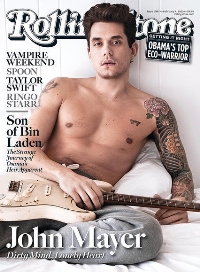 The magical world of Twitter has made Mayer a bit of an open book since he’s discovered it. He’s used his account to clear up rumors, speak out and share exciting factoids about his bowel
movements.

Perhaps realizing he’d gone a bit overboard, the 32-year-old crooner even went on a Twitter cleanse for the new year, tweeting, “By not micro-trading in my emotional stock value every second of the
day, I may just end up seeing the bigger, beautiful picture.”

He’s already back to being an open book on Twitter, however, and now, in the new Rolling Stone interview, he offers a string of one-liners about his late-night weed-and-video-game
sessions, a $20 million vintage watch collection and his quest to find “the Joshua Tree of vaginas” — aka, his ultimate life mate.

As for Aniston, whom he started dating back in 2008, he doesn’t quite say he’s not over her or that he wants her back, but rather that he’s not over the breakup. “I’m the [expletive],” Mayer
said.

“I burned the American flag. I basically murdered an ideal. I’ve never really gotten over it. It was one of the worst times of my life. I have this weird feeling, a pride thing, for the people I’ve
had relationships with. What would I be saying to Jen, who I think is [expletive] fantastic, if I said to her, ‘I don’t dislike you. In fact, I like you extremely well. But I have to back out of
this because it doesn’t arc over the horizon. This is not where I see myself for the rest of my life. This is not my ideal destiny.'”

Mayer, who also admits he’s somewhat damaged emotionally, may be looking for love, but he doesn’t seem to see himself as a catch and fears the
drama of dating.

“All I want to do now is [expletive] the girls I’ve already [expletive], because I can’t fathom explaining myself to somebody who can’t believe I’d be interested in them,” he said. “And they’re
going, ‘But you’re John Mayer!’ So I’m going backwards to move forward.
I’m too freaked out to meet anybody else.”

He’s already tweeting about the big article, of course. “Just read my Rolling Stone cover article. I’m still not sure if I would want to hang out with me,” he tweeted January 21. “After 30
minutes of twirling my hair into a knot, I say ‘[expletive] it.’ You can’t go wrong if you tell the truth.”