As Lady Gaga has taken the music industry by storm, she overcame the flu and other symptoms which canceled previous shows to perform in her hometown, New York City. 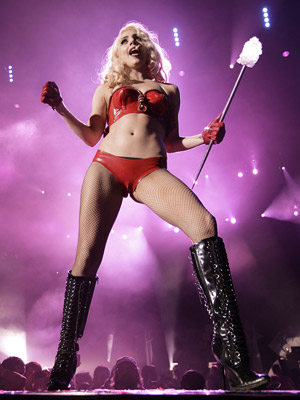 As the audience included VIP’s like The Donald (yes, as in Donald Trump), her fans went truly gaga over the performance. Whether it was couples wearing matching silver-spangled hot tops and
hot pants or wearing feather boas — they were ready for some Lady Gaga action.

After all, it was Lady Gaga’s first show since she canceled and postponed a variety of gigs due to mere exhaustion last week.

As Lady Gaga opened the show in a suit compiled of Christmas tree lights, her back up dancers simply wore white body stockings and neon green chin guards.

As Lady Gaga, a native New Yorker, illuminated Radio City Music Hall in her bevy of wardrobe changes including a blonde Marilyn Monroe
wig, she danced, pranced and sang across the stage. She reminisced about growing up in Manhattan, thanked her fans sincerely and said hello to her dad. In fact, when Lady Gaga appeared on Oprah
just last week she said how important it is for people to have a close, loving relationship with their parents.

She also opened her wallets and announced on the show that she’ll be donating all proceeds from her January 24 show at Radio City Hall to victims of Haiti. She proclaimed, “Sing this for the people of Haiti!” Amidst bopping around on stage she later shouted, “I love my hometown!”

As Lady Gaga wore countless costumes like a red leather bikini, matching captain’s hat and red eye makeup and black boots, she was carried off the stage during Boys Boys Boys as fans
shouted, “Gaga! Gaga!”

When she ended her whirlwind show in New York City, Lady Gaga appeared trapped inside planetary rings. And during Gaga’s finale,
Bad Romance, she sang a cappella as she morphed into a disco inferno amidst fog on the stage at Radio City.