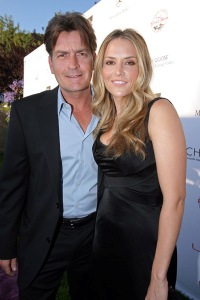 Word is
Mueller has been hospitalized with a fever of 105-degrees and possible pneumonia, stemming from complications from oral surgery. Although the
current protective order keeps Sheen from seeing his wife, he’s been spotted entering the hospital to be by her side during this frightening
health scare.

The estranged couple was set to appear in an Aspen, Colorado court today to contest the order against Sheen, which was filed after the
Christmas 911 drama that climaxed in Sheen’s arrest for allegedly assaulting Mueller and threatening her with a knife.

Days after the big showdown, Mueller was already talking reconciliation, which is why they’re headed back to court now. Mueller and Sheen
requested the restraining order be amended to allow them to communicate and try to work through their problems, while still restricting Sheen from carrying a weapon, drinking alcohol and using
drugs.

Today’s scheduled hearing was postponed due to Mueller’s illness.

According to TMZ, paperwork filed by Mueller’s lawyer, Yale Galanter, points to a “medical emergency with regard to an oral infection” and requested a 72-hour postponement, but word is Mueller
won’t be up for the rescheduled January 22 court date either.

SheKnows is sending Mueller wishes for a swift recovery.

Read on for more Charlie Sheen and Brooke Mueller