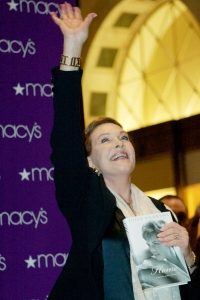 The book on
Andrews

SheKnows: Was it very painful to re-live some of those early childhood memories?

Julie Andrews: No, oddly enough, you have to understand that I had dealt with them, or thought about them, for a very long time. Actually, what was really painful was getting all
of my dates right. I mean I’ve been around for quite a while now. Just remembering ‘Was it 1952? Was it 1954? Was it 1948?’ just being sure that all the facts were right. And thank God for the
Internet these days. I would have never have gotten them.

SheKnows: So you Google’d yourself?

Julie Andrews: Well, a lot of times believe me. A lot of people know more about me than I knew.

SheKnows: Why you would think so hard about doing a next book about your autobiography? That would cover all your successes.

Julie Andrews: Well, I think that everybody knows what happened after Poppins in a way. I took it up to Mary Poppins and I didn’t think that many people knew
about my early history. Vaudeville…Moss Hart, the director of My Fair Lady wrote a wonderful book called Act One. It was one of the great, great autobiographies. When I read it
I realized that I had learned something from it about a piece of theatre history that I never knew anything about. That was the incentive. I had thought for years ‘Why publish a biography? I could
always give it to my kids but why come out with it?’ Eventually, I thought not many people know about those early and last dying days of British vaudeville. If I could give them a picture of what
that was like then that was the reason to do the book.

SheKnows: Your (Tooth Fairy) director on this film Michael Lembeck calls you a ‘cultural icon.’

Julie Andrews: It was the wings. 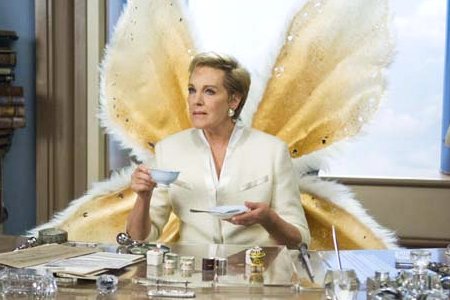 SheKnows: How do you feel about being referred to as a cultural icon? Are you comfortable with that definition?

Julie Andrews: Comfortable? I’m so flattered! I don’t believe it for a second. Everybody’s very kind. I don’t [see that] and neither do my kids [she laughs]. I guess if
you stick around long enough…

SheKnows: What about the singing? You are going to be performing again so have you recorded that yet?

Julie Andrews: No, no, no. I’m doing a concert in May, in London, which is the beginning of a small but international tour. It’s the same concert that I did at the Hollywood Bowl
last year and around the country. I’m just taking it to Europe. 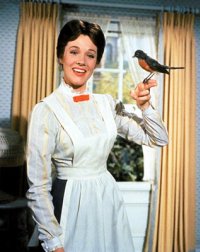 SheKnows: What size venues are you
going to be performing in?

SheKnows: That’s huge! How is your voice?

Julie Andrews: I’m not singing. I would like to be very clear about that. I have about five good bass notes, which is what I said last year to my audiences. I host the evening, I
narrate it, I tell stories, I sing-speak as best I can. If you are looking for me to sing The Sound of Music I could not, sadly, now. I wish I could. But I do come up with some surprises
and I think that the audience has a good time. I feel that they do otherwise I wouldn’t do it.

SheKnows: Do you go back and watch your movies?

Julie Andrews: I love to see the final cut, or whatever it is that the director would like for me to see. Yeah, I’ll probably see it if we go to a premiere or something like that.
Quite often I’ll turn on the television and something like Sound of Music will be on, or Victor Victoria and I might watch a moment or two. I don’t actually sit down and say ‘I’m
going to watch one of my movies.’ No.

Julie Andrews: I think he used not to, but he freely admits that he was young and foolish, and thought he was being hip. Actually, if you catch him on a quiet day, he’s tickled to
death.

Sounding off on Sound of Music and Shrek

SheKnows: You did a great interview with him on the bonus features for the 40th anniversary Blu-Ray of the film. You kind of brought him out of that whole thing.

Julie Andrews: He’s a pussycat really. He just likes to pretend to be a bad boy. 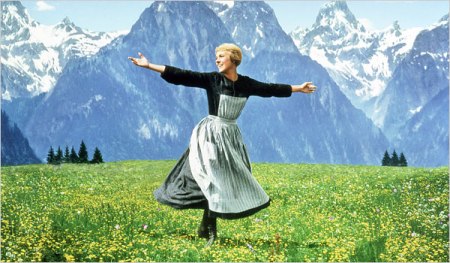 SheKnows: He’s playing Tolstoy in the film The Last Station.

Julie Andrews: Yes, I would love to see it. I will see it.

SheKnows: Are you voicing another Shrek?

Julie Andrews: Yes, that’s coming up. I’m not featured as much in this Shrek. But I am in it. It’s going to be lovely I think, based on what I’ve seen of it, which when
you do an animated film you don’t see that much. But, I have another lovely [animated] film coming out later in the year called Despicable Me with Steve Carell.

SheKnows: Who are you in that one?

Julie Andrews: I play Carell’s mom and it is maybe the nastiest character I have

Julie Andrews: Well, she’s a bad woman with a wonderful attitude. She is so self-involved that she’s delicious. I think it’s coming out in July. Her name is Marlena. They said I
could name her, and she’s the ugliest looking wench you’ve ever seen, but she thinks she is just [gorgeous].

SheKnows: Do you use your own voice or do you change it?

Julie Andrews: I did change my voice for that one. I did the most white bread German, Jewish, English awful mother that you have ever heard. It was ridiculous but I was trying to
balance it out.

Read on for more Julie Andrews and The Tooth Fairy

The top 10 films of 2010 starring Julie Andrews in Shrek