Dame Julie Andrews just told SheKnows “Thank God for the internet!” Andrews was referring to her need to research facts from her own life in order to write her popular 2008 autobiography Home: A Memoir of My Early Years. 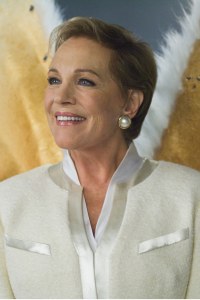 Andrews, who insisted we call her Julie, is a
much-loved cultural icon, although she declared that both she and her children don’t think that is the case. Andrews has been the recipient of a Golden Globe, Emmy, Grammy, BAFTA, People’s Choice Award, Theatre World Award, Screen Actors Guild and Academy Award honors.

SheKnows was with the affable Julie to chat about her new family film Tooth Fairy in which she co-stars with hunky “The Rock,” Dwayne
Johnson.

“When I first met Dwayne, he was wearing a pink tou tou! He looks pretty in pink,” Andrews admits. “I have to say”.

In the family comedy-fantasy The Tooth Fairy, Julie plays a “fairy-queenly” corporate type who is kicking butt and taking names. She tells SheKnows that she completely enjoyed sentencing
Johnson’s character to duty as a tooth fairy as punishment for his bad habit of destroying kids’ hopes and dreams.

In our interview, the gracious mega-star wasn’t uncomfortable speaking about the loss of her four-octave voice range after vocal chord surgery in 1997. Andrews now “speak-sings” and will do so in
an international concert soon, launching at the huge O2 English concert arena where Michael Jackson’s This is
It tour was to have begun. She continues to write successful children’s’ books with her daughter.

Dressed in classy black suit, creme-colored silk blouse accessorized by black and gold necklace and earrings, Ms Andrews entered our interview suite with a cheery “Hello! How are you today?”

SheKnows: Very happy to be chatting with you! Julie, you write children’s books and you have a great imagination. I wonder if your character’s life philosophy was very much like
your own as far as not destroying children’s dreams?

Julie Andrews: Yes. Actually, the charm of the script the moment I read it was that I completely identified with some of the books that I do attempt to write. I was thrilled
because it has such a gorgeous message. It really is that we shouldn’t destroy our dreams. We should always hold onto them. I was immediately [charmed]. You couldn’t be more right.

SheKnows: It seems to me that part of the criteria for you to select a project these days is that you want to have fun. Right or wrong?

Julie Andrews: I think it depends what each piece is saying. It really depends on the script as much as anything else. This one really resonated. I think it’s really, if one
is fortunate enough to have a script slide across one’s desk these days, it’s about ‘Does it resonate? Do I feel like I can help it and do something for them, and with it?’ This one was very
easy to say ‘yes’ to.

SheKnows: You seem to have been having a lot of fun with Dwayne [Johnson] in some of these scenes. Was it fun being kind of a hard-ass? 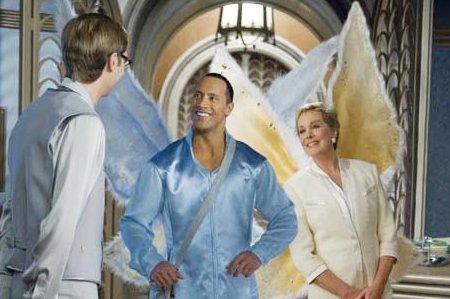 Julie Andrews: [Laughing] Yes. I loved it, loved it! I mean, it’s very hard to tell [that] big guy off, you know? And the wings were a problem too.

SheKnows: It was nice to see you flying again, by the way.

Julie Andrews: Thank you, yes. I needed to brush up on that a bit. It took a bit

of effort this time.

SheKnows: What sort of novels, films and stories, fired your imagination as a child?

Julie Andrews: Obviously I had a wonderful tutor that traveled with me because I was very busy working as a child. I had a lovely lady that finally set me straight and knew that I
loved to read. She introduced me to all the classics. But, my father was a teacher and he, at about age nine or ten took me into a bookstore and said ‘I’m going to buy you a book. Here’s what
seems like a good one.’

SheKnows: What was it?

Julie Andrews: It’s a book that I’ve had the great fortune to republish, to bring back, to the public here in America, because it had not been published for many, many years. It’s
a tiny little book. If you think Watership Down but maybe even better, it’s a nature study. It’s called The Little Grey Men and it is by an author who literally only signed his
initials ‘BB’ That book has probably influenced my writing and set a standard for me — probably because my dad gave it to me and probably because it is beautifully written. It is a little classic.

SheKnows: Julie, are you planning on writing any more children’s books? Where is that part of your career?

Julie Andrews: It’s very, very much a part of my career. We just had a wonderful book, that I am very proud of, come out just before Christmas. It was an anthology of poems, songs,
and lullabies. I have to say, very proudly, it’s been on the bestseller list for children. I think it was on the New York Times’ bestseller list for nine weeks. I am thrilled. There is
another one coming out in May and I have another couple I’m working on right now. It’s very much ongoing.

SheKnows: Would any of them make good movies?

Julie Andrews: Well, I think so but it’s from your lips to someone’s ears.

SheKnows: How cathartic was it for you to write that? Are we going to see a part two anytime soon?

Julie Andrews: I’m not sure about a part two. A lot of people have very nicely and kindly been asking, but I’m not sure about that, I’ll have to think about it. It was cathartic.
Don’t forget that I’ve had a number of years to think about it and dwell on what it is I might like to say. I did want to be truthful. It seems silly to write something and not just say it as it
was. It was also something that I’ve lived with for years and none of it bothers me in any way. It’s something that I’ve just said ‘Well, that was my beginning that was my existence.’ I would never
have finished it if it hadn’t been for my lovely daughter, with whom I do write books sometimes. She encouraged, pushed, and interviewed me and helped transcribe. She really did an enormous amount
of work that nudged me.

Up next…Julie talks about reliving painful childhood memories while writing her autobiography and whether she and her Sound of Music co-star Christopher Plummer would reunite
again onscreen?