Jay Leno seriously addressed the NBC late night shakeup for the first time on his show.

While Leno and Conan O’Brien have exchanged increasingly sharp barbs over the situation in the past week, Jay — being heavily portrayed as the bad guy — finally explained things from his
viewpoint. 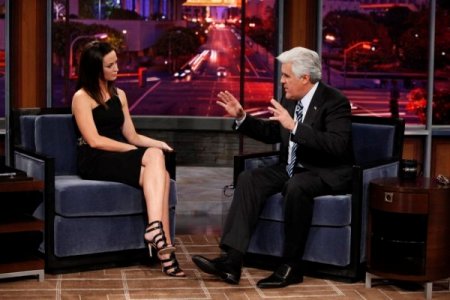 Leno told viewers his conversation with NBC made clear he would only agree to return to The Tonight Show after Conan rejected a plan
to move his show back a half hour. Leno even says he asked to be removed from his contract rather than deal with the mess after his prime time
show failed, but NBC refused.

“‘No, you’re still a valuable asset to this company,'” he said the network told him. Leno replied, “How valuable can I be? You fired me twice.”

Jay also gave Conan a nod for behaving himself. “Through all of this, Conan O’Brien has been a gentleman. He’s a good guy, I have no
animosity toward him. This is all business,” Leno said. “You know, folks, if you don’t get the ratings, they take you off the air.”

Both Jay and Conan’s shows were ratings failures. The problem for Conan’s fans is that while Conan is being punished for his failure, Leno is
being rewarded for his own.

Of course, he couldn’t resist getting in one last laugh: “CBS is now developing a new sitcom about the troubles here at NBC. It’s called `Two Men and a Half-Assed Network.'”


Jay explains his side of the story


Read on for more Jay Leno

Jay Leno gets the last laugh