Giddy on Up by Laura Bell Bundy is the first inescapable catchy hit of 2010. Giddy on Up is from someone who knows a few things about belting out catchy tunes. 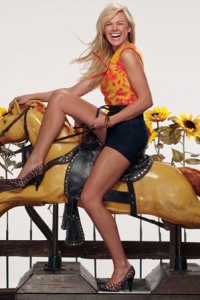 Bundy blasted onto public conscious on Broadway in Legally Blonde: The Musical and is currently fulfilling a lifelong dream by releasing her debut country album. Bundy’s first video is in SheKnows Entertainment’s hot little hands.

Bundy told us exclusively in 2008 about her country calling at the MTV Movie Awards. “I can’t wait to lay down some tracks of my own songs,” Bundy said. “I’m eager to surprise people with what else I can do!”

Laura Bell Bundy’s Giddy on Up is an Ear Candy country classic on three levels. First, the tone of Bundy’s singing is impeccable for the country genre. Second, the lyrics she sings paint a picture that is also perfectly at home with the country twang.

But, the reason we adore this ditty the most, is it proves why it makes perfect sense Laura Bell Bundy bust out as a country superstar in the making. Name one catchy country song with its own dance steps that did not catch fire. Bundy is smart, watch for her dance steps from the Giddy on Up video on the dance floors across America as sure as Bundy’s Giddy on Up becomes a number one country smash.

So ladies and gentlemen, pull on those cowboy boots and hit the dance floor with Laura Bell Bundy and get ready to Giddy on Up!