The stars were bright at the 2010 Golden Globe Awards January 17, but the celebrities inside the press room after winning Golden Globe gold were especially luminescent. 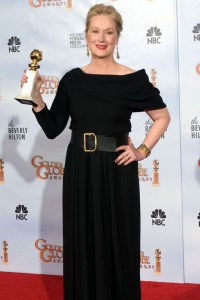 SheKnows is rolling out the Golden Globes press room interviews! First, we had to begin our coverage with two class acts and legends in Hollywood, James Cameron and Meryl Streep. After winning their awards: Best Actress in a Motion Picture Comedy for Julie and Julia for Streep and Best Picture and Best Director for Cameron’s Avatar, the pair were elated, yet cool. Are we surprised? Hardly!

First up was Streep.

“(Julia Child) was in her 90s and was not amused by the fact that Julie Powell was writing a book blog cooking her way through Mastering the Art of French Cooking by Julia Child,” Streep said. “She was disgruntled because she felt this person was not being serious about cuisine. Julia was a sunny personality, but she really took this quite seriously. She tried to establish a Master’s Degree in gastronomy at Boston University. She wanted it to be a serious point of study.”

Streep added that Child was a product of another generation and also did not completely understand Powell’s prose. “Julie was offended by the language. She was a lady of a certain age and a certain time when you didn’t say F*** all the time,” Streep said as the room erupted in laughter.

When asked if Julie and Julia stoked any culinary fires within herself, Streep put her elbow on her side and looked at the gathered press. “I have four children. I have been cooking for many years — but, not well,” Streep said and laughed. “In Julie and Julia, it was an inspiration to dive back in. There aren’t so many diverse palettes in the group (on a movie). Like, one of my children only ate white food for many years it was really to accommodate to that. It’s more fun now when it’s just me and my husband.”

How does Streep stay private?

“I think it was easier for me coming up. There was no such thing as the 24-hour news cycle. I think for younger actress, the scrutiny is very, very hard,” Streep said. “The blogosphere, where everybody comments on their weight and appearance endlessly — that always happened — but only happened in apartments and restaurants. Now, it’s kind of a relentless drag on people’s work. It interferes of you ability to be a good actress if you have to be self aware all the time. To me, it isn’t valuable to think how I’m coming off all the time if I’m trying to create a character because that’s a thing that I like to do. It’s a process I love. It is sort of like falling in love — surrendering to another person, in this case a character.

“It means a great deal to have the appreciation of the people in my community — my film community. It’s a little family. I don’t live in the glare of the spotlight. I come from little outside life and come into this room where everyone I’ve ever worked with is people I love, people I would love to work with, people whose work I’ve followed forever, it’s like a homecoming to be able to come to these award shows,” Streep said. “The award itself is from the Hollywood Foreign Press who have seen me in movies for 30 years and are still not sick of me, that means something to me. It really does, because it’s hard to remain new. I’m very proud to get this award, particularly for this movie. I love this movie.

“In all the clips you saw tonight, you can see in all the expressions on Zoe’s (Saldana) face, she’s yelling and pushing Jake (Sam Worthington) back, that’s all exactly what they did. Our process, which was new to this film, we had to make sure going in that that would be the case,” Cameron said. Before a dash of color was added to anything, a mission statement was given by the filmmaker. “What the actors did would be 100 percent translated to the CG characters. Animators are involved, but their task is neither embellishes nor diminish what the actors have done.” 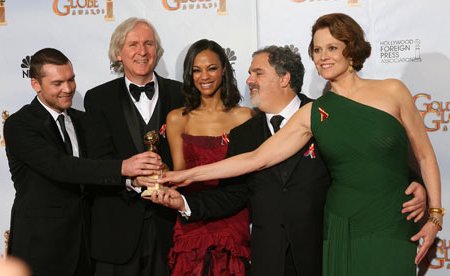 “They get to play when it comes to the flying creatures and the ground creatures, but when we are dealing with the human performed character, their job is not add or subject, but to preserve. It took the best animators in the world to do it. It was the only thing that made sense to us going into this,” Cameron added.

“Look, we’ll have to see, if it changes things, it changes things. One thing Avatar could do, because of its success especially like its critical success like tonight, is give permission to other filmmakers to think of 3D as something that is not necessarily relegated to animation for kids movies or schlock horror films,” Cameron said. “Because Avatar is a live action film, it gives these filmmakers a very broad permission to use these tools.”

Is 3D the future?

“It will be a very big part of the future. It’s been demonstrated. It’s just a question of breaking out in breadth with other dramatic films, other live actions. Then it will be rolling into home. It has already at the Consumer Electronic Show,” Cameron said. Then, the cinematic King of the World got serious.

“The other thing that is interesting, about this Best Picture Golden Globe, in the history of the Golden Globes, only one other science fiction film has gotten Best Picture Drama — one — and that’s ET. You’ve got a genre that has always been critically treated as a second class citizen. It was a huge breakthrough when Sigourney (Weaver) got nominated for a science fiction movie for Aliens in ’86. Hopefully, this is a part of a trend of accepting science fiction as a dramatic form of cinema. Not a genre, but a form of drama.”