It was an upbeat but laid back night at the 67th Annual Golden Globes, with Ricky Gervais delivering the laughs and the celebs at Beverly Hills Hilton giving heartfelt thanks, while also sending out thoughts and assistance to Haiti.

As expected, funnyman Gervais said whatever he wanted and nothing seeming to be off limits. While plugging just about any project he’s ever touched, he got laughs with jokes about Jay Leno’s firing and Paul McCartney’s divorce as well as the hand that feeds — the Golden Globes themselves. 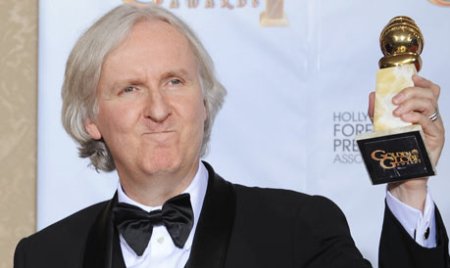 Gervais even got in a drunk joke while introducing Mel Gibson! Like the rest of the butts of his jokes, Gibson took it in stride, pretending to slur a bit before giving Avatar its first award of the night.

The 3-D epic about blue aliens continues to sweep the box office, so it’s no surprise it took Best Drama, while writer-director-producer James Cameron won Best Director. “Avatar asks us to see that everything is connected — all human beings to each other and us to the earth,” Cameron said in his acceptance speech. “If you have to go four and half light years to another, made up planet to appreciate this miracle of a world that we have right here, well you know what? That’s the wonder of cinema right there. That’s the magic.” 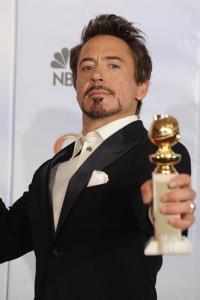 In the Comedy or Musical category, Robert Downey Jr took home Best Actor for Sherlock Holmes, not to mention funniest acceptance of the night with his “No Thanks” speech, where he staunchly refused to thank a list of people because, thereby thanking them.

Best Motion Picture in that category went to The Hangover, which is being called the surprise of the night by many, but SheKnows called it in our Golden Globe Awards movie predictions.

Bridges, who got a standing ovation when he took the stage to accept, panned, “You’re really screwing up my underappreciated status here!”

Meryl Streep beat herself out for Best Actress in a Comedy or Musical, walking away with the award for her work in Julia and Julia.

“I’ve in my long career, played so many extraordinary women that basically, I’m getting mistaken for one,” said the actress, who already has seven Globes at home.

Streep then proved there’s no mistake in the perception by following that up with a nod to what was on everyone’s minds.

“I come to Golden Globes weekend and I’m really honestly conflicted about how to have my happy movie-self in the face of everything that I’m aware of in the real word,” Streep said. “That’s when I have my mothers voice coming to me saying, ‘Partners in Health. Shoot some money to Partners in Health, put on a smile and be damn grateful you have the dollars to help,’ and I am really grateful.”

Amid all the laughs and thank yous, Haiti was never forgotten. Before presenting the first award, Nicole Kidman stopped the flow to point out the support ribbons people were wearing. She also plugged the upcoming fundraising telethon, scheduled for Friday January 22 (to air on two-dozen networks) and organized by George Clooney and there were requests throughout the show for viewers to visit NBC.com to donate what they can to Haiti relief. 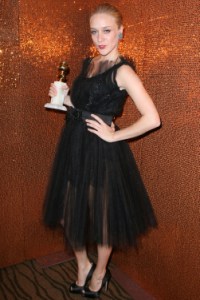 The comedy or musical nods went to Best Actress Toni Collette for The United States of Tara and Best Actor Alec Baldwin for 30 Rock, while Glee rocked the house with Best Comedy or Musical.

“This show is about a lot of things,” Glee creator Ryan Murphy said. “It’s about the importance of arts education and this is for anybody and everybody who got a wedgie in high school.”

The big one: Cecil B Demille

Robert De Niro and Leonardo DiCaprio shared the stage to rave about Martin Scorsese and honor him with the Cecil B DeMille Award.

“Marty eats, drinks and sleeps film,” DeNiro said. “I hear there are videos on the internet of Marty have sex with film — a hot reel of 35 millimeter stock.”

Leo almost got tears from his mentor when he said Scorsese would go down in history as the Picasso, da Vinci or Shakespeare of his medium. Scorsese, however, looked back to other great filmmakers before him, honoring Cecil B DeMille and thanking the Foreign Press’ efforts to restore classic films.

“Motion pictures are part of a continuum — a living, ongoing history,” Scorsese said. “For me to be a part of that, well, I thank you.” 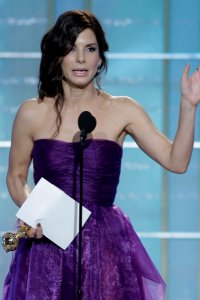 Both Downey and Cameron warned the Globes not to interrupt their speeches after Bullock, the 2009 Queen of the Box Office, was played off stage, but the truth is, while that music was used several times during the show, Bullock was the only familiar face at the Globes to face it.

Time was running tight by the Best Actress announcement, thanks in part to the treacherous maze of tables between the winners and the stage, but before that the music had played for just about every person who didn’t have famous face.

A handful of excited actors never got their speeches together, but were given time to stammer, while worthy folks like, for example, Matthew Weiner, were given the wrap up signal before even starting to talk. For those who don’t know, Weiner is the man behind Mad Men, which won Best Television Series. He kept talking, in spite of the music, and delivered one of the most eloquent acceptance speeches of the eve. Shame on you, Golden Globes!

All in all, however, it was a nice evening with Hollywood’s biggest and best. Here’s a list of who walked home a winner: 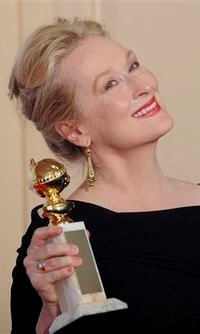