It’s back-to-back Jack Bauer on 24 for a four-hour season premiere January 17 and 18. This time out, the 24 action kicks off in New York City! “It’s a guarantee that he’s going to have a bad day,” star and exec producer Kiefer Sutherland promised us at the TCA press tour. 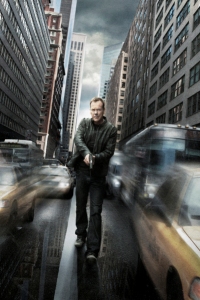 Jack Bauer (Sutherland)has had his share of dark days, but he’s actually smiling when we catch up with him this season. Unfortunately, trouble shows up on his
doorstep.

Jack is quickly pulled back into action, while President Taylor (Cherry Jones) is focused on changing history with Middle Eastern President
Omar Hasson (Anil Kapoor of Slumdog Millionaire). The world leaders are determined to finally
make steps toward peace in the Middle East, but no surprise, not everyone wants that and Jack soon finds himself a key component in stopping an assassination attempt.

Prinze is one of the biggest additions to this year’s cast. He plays a former Marine and general badass — a real departure from the cutie’s normal fare!

“For most of my career, if I’m in it, I’m struggling to fall in love for 96 minutes and I always get the girl,” Prinze quipped. “I received the sides for this part when I was in New
York, and they were casting out of LA I went to the casting director’s office and there were no other actors there. I said, ‘Look, you’re not waiting for anyone else to get in here, so
we’re doing this audition ’til I get it right.’ And she was nice enough to let me get a few cracks at it. I sent her a big box of cookies when I got the part. I mean, I don’t get
offered this kind of a job, period.”

Chris Diamantopoulos from The Starter Wife and The Full Monty also joins the cast as the president’s chief of staff and Elisha
Cuthbert returns for a handful of episodes as Kim Bauer, along with Vampire Diaries star Paul Wesley as her hubby.

As the crisis escalates in the third hour on Monday, Agent Renee Walker (Annie Wersching) will also be called back to duty. Jack finds his partner from last season still whirling from her first day
by his side.

The premiere kicks off with two hours January 17 at 9 pm on Fox, and continues for two more hours on January 18 at 8 pm.

Read on for more Kiefer Sutherland and 24

Kiefer Sutherland gets candid about jail and 24

50 mins ago
by Hanna McNeila