Susan Boyle sparked rumors of another impending breakdown after a day of bizarre behavior at London’s Heathrow Airport. 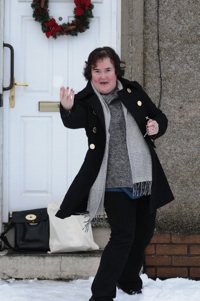 The Britain’s Got Talent winner, who was hospitalized last year for being cookoo for coco puffs, first grabbed a mop from an airport janitor and used it as a mock microphone to serenade fellow
passengers.

Then she began to mop the floor and polish the shoes of guests in the VIP lounge with the tool. When airline officials intervened, she swore loudly and ran away screaming, “I’ve escaped! I’ve
escaped!”

“It was chaos,” a source told The Sun. “Susan was very restless and agitated from the minute she walked in and immediately started making a scene.”

“She was singing and dancing around, shouting obscenities at full volume.”

An airport staffer eventually got Boyle to chill and sat with her until she could board her flight. The only comment British Airways had was, “A customer in the BA lounge on Tuesday was asked to
temper their behavior as it was becoming disruptive.”

Susan Boyle gets a mini makeover