The Hurt Locker took 2009 movie screens by storm. Director Kathryn Bigelow had weaved a tale so tight audiences could feel the intense pressures of her characters diffusing bombs in the middle of the Iraq War. 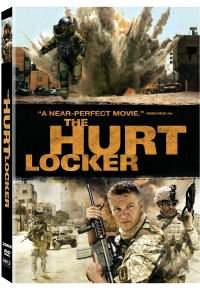 The Hurt Locker is a leading
contender for the January 17 Golden Globes and upcoming Academy Awards.

She directed the James Cameron-penned Strange Days starring Ralph Fiennes and Juliette Lewis in 1995 and then took Hollywood by storm
again with Sean Penn’s The Weight of Water in 2000, Harrison Ford’s K19: The Widowmaker in 2002, while also being
the mind behind Carla Gugino’s outstanding, yet short-lived TV series based on the Jennifer Lopez and George Clooney icon that is Out of Sight, Karen Sisco.

Bigelow is also an accomplished painter and her talent for the visual transcends the canvas, especially on The Hurt Locker.

A Locker worth keeping forever

If pure, unadulterated adrenaline cinematic journeys are your cup of tea, then The Hurt Locker DVD is one to buy, not rent. If films that capture deep character studies tickle your fancy,
Bigelow has crafted movie manna. If a story whose illustration of those related to those who literally bleed to battle for America’s freedom and that effect on families stateside, The
Hurt Locker is a hurting and haunting mirror that achieves capturing the Iraq War as no other film has since George W Bush began the assault to remove Saddam Hussein.

The actors of The Hurt Locker are all familiar to the eye, although they may not yet be household names. Bigelow’s Strange Days star Ralph Fiennes makes a cameo appearance as
does Evangeline Lilly (Lost) and Guy Pearce (Momento).

Read on for more the hurt locker