Jessica Simpson and Billy Corgan have called it quits, or are they still an odd couple? Simpson and Corgan were spotted hanging out together as her beau worked on his new album. The Smashing Pumpkins singer is back in the studio again for his new album, Teargarden By Kaleidyscope. 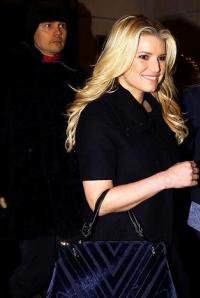 Although rumors circulated about their on-again, off-again romance, thanks to Twitter stars are able to set the record
straight. Or at least imply there’s a little something something going on. Simpson Tweeted, “I am blessed” and then wrote,
“Fun to be lost in laughter.”

Although people are saying the couple broke up in December because of Jessica’s lack of interest in his spirituality. The vibe we’re getting is that it’s just that: a rumor. In pics on
Twitter, Jessica Simpson is looking at Billy Corgan and smiling as he’s singing.

In yet another shot Simpson’s watching him hold a guitar overhead. Considering they’re both singers and in the entertainment
business and they already have something major in common, whether or not they’re more than friends matters not: according to her tweets, Jessica seems to enjoy his company.

Most notably spotted here in New York City, Simpson celebrated the opening of her sister’s night in Chicago on Broadway. As
Ashlee Simpson dazzled onlookers with her performance, Jessica was the beaming big sis in the audience. Ashlee’s run ends in early February.