A sex tape featuring Lindsay Lohan in some very compromising positions is being shopped around! 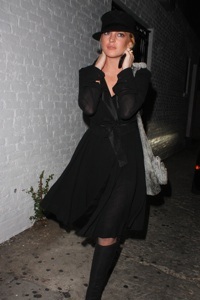 The 47-second clip, according to
The Mirror, features Lindsay along with a male waiter. Guess that whole lesbian thing is done with.

A source told The Mirror, “This video file is dynamite. It is pretty seedy and shows Lindsay engaged in a particular sex act which,
obviously, should remain behind closed doors. Lindsay was desperate to start 2010 off on a good footing and this is the very last thing she needs. If and when it is released on the internet there
is absolutely nothing she or her lawyers can do about it. She is devastated — particularly as she is working hard on cleaning up her act. Lindsay has just made a serious documentary on child
poverty in India for the BBC, she is terrified this will be put in jeopardy now. It is fair to say that Lindsay has had a pretty torrid past 24 hours.”

Lohan is attempting to rehab her image — if not her body — with a documentary on child trafficking in India. A sex tape would put her three steps back.

But is it real? The only way to tell for sure is if it shows up online, and even then it could be questionable. A couple of years ago there was a fake clip of Calum Best being serviced by a girl
who claimed to be Lindsay. Lohan got off the hook that time. Will she be so lucky this time?