Grey’s Anatomy and Private Practice return from winter break with an emotional crossover that promises breakups, sex and surgeries!

When Mark flies Addison to Seattle on Grey’s Anatomy, Addison gets a kick out of calling him “Grandpa,” but his daughter Sloan (Levin
Rambin) doesn’t see any humor in being under the care of one of her dad’s former lovers. 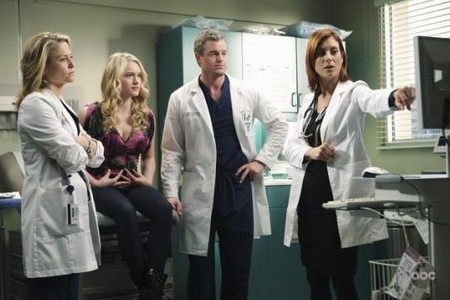 The real tension, however, comes from a surprising suggestion Mark makes to Lexi, not to mention the danger facing Sloan and her unborn baby, who need to undergo a difficult procedure.

Meanwhile, Meredith continues to keep the Chief’s secret about falling off the wagon and Derek remains suspicious of the special attention she’s getting in return. His concern skyrockets when
Meredith gets to assist in a high profile operation.

Owen finds himself in a similar situation, doubting Teddy’s (Kim Raver) motives after she assigns Cristina the lead on a complicated surgery and then doesn’t step in to assist when things take a
dangerous turn.

By the end of the hour, Sloan’s situation escalates and Mark takes his pregnant daughter to Oceanside — aka Private Practice. With
tensions high, Mark and Addison find comfort in each other and fall back to their old ways on her office floor, which brings a surprising reaction from Sam.

Cooper is distracted by his problems with Charlotte and ends up facing off against Violet over how to handle the situation when they learn one of his young patient’s mothers is a hoarder, while
Dell and Naomi deal with raising their kids under the same roof.

The drama starts tonight at 9 pm with Grey’s Anatomy and continues at 10 pm with Private Practice.

The cast of Grey’s Anatomy on hitting 100 episodes

Test your Grey’s Anatomy knowledge with our quiz!