As Conan O’Brien’s days are numbered until The Tonight Show will apparently move to a 12:05 am slot without him, his fans are rallying behind him. The comedian’s show numbers are soaring as fans respond to support Team Conan. On O’Brien’s January 14 show he proclaimed, “I’m getting a lot of support out there, especially from an online group calling themselves ”

Consider this: on the January 12 episode of The Tonight Show with Conan O’Brien scored a 1.7/7 in adults in the 18 to 49 year old demographic in Nielsen’s 25 major markets with
people meters. As for what this really means? He gained 40 percent more viewers than January 11 and smashed his competition, Late Show With David Letterman. 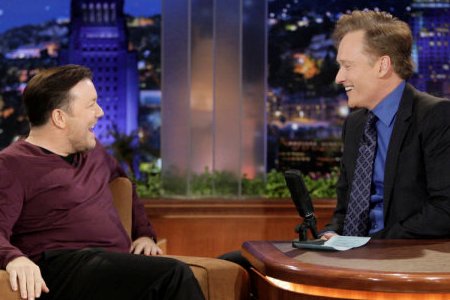 The night proved to be a major coup for O’Brien who’s letter was published in the New York Times on January 11 in response
to his network’s decision to pull the plug on his show after seven months in its spot. He wrote, “I cannot participate in what I honestly believe is [The Tonight Show’s]
destruction. Some people will make the argument that with DVRs and the Internet a time slot doesn’t matter. But with The Tonight Show, I believe nothing could matter more.”

O’Brien’s numbers are even more stellar in comparison to viewers from The Jay Leno Show on the very same night: his viewership was down ten percent. Industry insiders are attributing
that to a lower lead-in from The Biggest Loser since millions of viewers were glued to American Idol. As Conan’s
numbers and fan base continue to rise, so does the Team Conan effort on the internet.

For instance, a Los Angeles artist sketched a heroic image of Conan standing in front of the American flag. This image is sweeping Twitter as #TeamConan is a popular tweet. And yes, there’s
also a pro-Conan group on Facebook. If anything, the battle is not leaving the late night hosts with a shortage for material.

Jay Leno criticized his bosses as well saying that the war in Afghanistan is “another NBC” instead of “another
Vietnam.” Although Jimmy Fallon isn’t embroiled in the battle at the moment, he supports both comedians who he believes paved the way for his success. Since they both offered him advice
which he alluded to on last night’s show, he also blasted NBC and mentioned it’s like getting married and now dealing with the in-laws.

Read on for more Conan O’Brien and Jay Leno

Jay Leno and Conan O’Brien having the last laugh