Police were called to the home of Heidi Montag and Spencer Pratt after a bystander reported a kidnapping in progress. 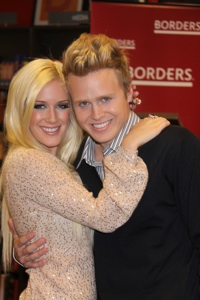 No one was actually in trouble, but it looks as if Heidi’s
boobs caused much ado about nothing (much like her career).

Here’s what went down: The Los Angeles Police Department received a worried phone call from someone reporting a kidnapping in progress outside the home of Heidi and Spencer.

The caller reported seeing a woman with a pillowcase over her head being rushed inside the house by a man in a black shirt. Minutes later, the home was surrounded by cop cars, helicopters circled
the neighborhood and police stood with guns drawn.

A voice came from a helicopter loudspeaker said, “Man in the black shirt, come out of the house.”

Minutes later the man in black was taken into police custody. They handcuffed him briefly and placed him in the back of a cruiser, where he explained what was really going on…

Heidi just had a boob job. Montag also has a contract with People magazine for the first pics of her new look — in fact, the mag is
featuring her on the cover in an issue that is probably hitting newsstands as you read this. Part of such contracts is that no other photos of the subject in question — namely, Heidi and her new
boobs — be published by any other source until the paying entity releases their own photos.

Hence the pillowcase. Heidi and Spencer weren’t taking any chances that one of the pesky paparazzi they frequently court would snap a pic of her face and her boobs, so they threw a bag over her
head and the mysterious man in black was a handler leading her inside. The bystander mistook this for a kidnapping.

Heidi Montag’s boobs: Ruining the day for an entire neighborhood.

Read on for more heidi montag

Does Heidi Montag have baby fever?