The 67th Annual Golden Globe Awards air January 17. With funnyman Ricky Gervais hosting, The Golden Globes promises to be a laugh-fest without limits! 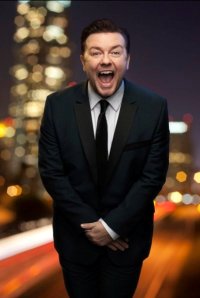 “They’ve asked me to
host the Golden Globes — yeah, I know, what were they thinking?” quiped Gervais, the man behind the The Office, Extras
and The Invention of Lying. “It’s live. I can say anything. What can they do? They can’t have the money back: I’ve spent it!”

The Golden Globes are already known for being a bit more laid back then other awards shows, perhaps because the celebs seem to consider it more
their party than the others. It also helps that they’re sitting at dinner tables with their pals, continually sipping cocktails!

The big news of Golden Globes 2010 seems to be that Brad Pitt and Angelina Jolie won’t be making the big night — apparently because Pitt didn’t land a nom for Inglourious Basterds, which is up for Best Picture, Best Actor in a Supporting Role, Best Director and Best Screenplay.

Never fear, however, as always, there will be countless big names on hand, and not just from the nominee list (posted below)! Don’t miss our 2010 Golden Globe predictions!

Robert De Niro and Leonardo DiCaprio will be there to present the Hollywood Foreign Press Association’s Cecil B DeMille Award to Martin
Scorsese for his “outstanding contribution to the entertainment field.”

With Gervais at the helm, no one in the celeb audience will be safe from pokes, jabs and laughs at their expense. “That’s my job, isn’t it?” Gervais told USA Today. “I don’t feel I’m
representing the people in the room. I feel I’m representing the fat people at home on the couch watching it.

“I have two little people in my head. One of them’s got a little halo on, saying, ‘Don’t insult people too much.’ The other has got a little pair of horns and goes, ‘No, think of how funny it’d
be.’ It’s a little bit of a fight between good and evil.”

Due to the invention of a little thing called the internet, the show will air live on both coasts at the same time, for the first time. Tune in on January 17 to the three-hour fest live across the
country (yes that mean’s you west coast at 5 pm!) on NBC at 8 pm ET.

Check listings for red carpet action and also know time zones west of the East Coast, NBC will rebroadcast the entire affair at 8 pm for us west coasters…and be sure to stay with SheKnows as
we cover The Golden Globes red carpet, fashion winners and losers and who won what and said what at the awards themselves!

And the Nominees Are:

Best Motion Picture, Drama: Avatar; The Hurt Locker; Inglourious Basterds; Precious: Based on the Novel ‘Push’ by Sapphire; Up in the Air