Rachel Weisz has an Oscar at home for her impeccable performance in The Constant Gardner, but it is her experience working with director Peter Jackson on The Lovely Bones that has her buzzing currently at The Four Seasons in Beverly Hills.

Weisz spoke to SheKnows exclusively about the film that opens nationally January 15. Also in our insightful chat, Weisz
shares how motherhood influences her acting choices, if at all, and how starring alongside Mark Wahlberg, Saoirse Ronan, Rose McIver and Stanley Tucci made the telling of a tough story in The Lovely Bones feel like utter
bliss. 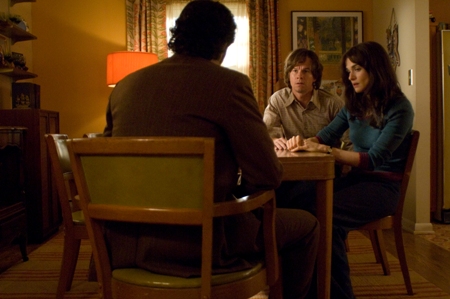 SheKnows: Hello Rachel, thanks for visiting with SheKnows.

Rachel Weisz: SheKnows! It’s my pleasure to do so.

SheKnows: Do you think that The Lovely Bones is about vengeance or more about moving on — or perhaps a bit of both?

Rachel Weisz: Well, you have just described the exact point of views of the mother and father in the film. Mark’s character is focused on vengeance where my character, she
doesn’t think vengeance will bring back her daughter. She hasn’t really found a way of moving on either. It’s about the difficulty of moving on and how each of us deals with it
differently.

SheKnows: Had you read The Lovely Bones before you entertained the idea of doing the film?

SheKnows: What struck you personally about this book?

Rachel Weisz: I think the most striking thing is it’s narrated by a dead person. She’s incredibly alive. So, it’s an incredibly personal point of view.

SheKnows: How does the process of tackling a character based on a book add to the experience? You kind of have an extra resource.

Rachel Weisz: It’s the same, but it’s different. As you say, there is an extra resource for you to fancy your imagination. You get all parts of the character — the
backstory, biographies — it’s a huge help.

Rachel revels in the ’70s

SheKnows: What was it like playing a woman of the ’70s?

Rachel Weisz: (Laughs) I love the fashion! I’m very into ’70s clothes, so you always found me milling about wardrobe (laughs). I was very happy to be
in the ’70s. I wish I was older in the ’70s!

SheKnows: A very interesting time, that is for sure.

Up next…Rachel dishes working with legendary Peter Jackson and what she believes is the true theme of The Lovely Bones.