Fox executives surprised the TCA press tour with an unscheduled panelist: Simon Cowell. Cowell was there with a major announcement that he is leaving American Idol and SheKnows was there! 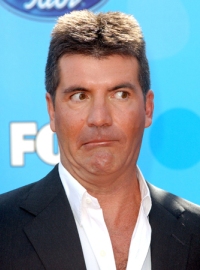 “X-Factor will launch in America in 2011, with me judging the show,” Cowell revealed. “This will be my last season on American Idol.”

With those words, as SheKnows sat in the Simon Cowell press conference, the collective room was shocked.

There’s been much buzz and speculation on this already, but contracts were signed less than an hour before the big announcement. Cowell will serve as both exec producer and judge on the
X-Factor, which is coming to Fox, not NBC as previously suspected.

If you’re wondering what the different between the two shows are, there are three biggies. First, X-Factor has no age limit, which means we could see 16 year olds, 100-years-olds or say,
someone like Susan Boyle competing. Second, its not just about the soloists. Groups are encouraged to take the stage together.

Third, the judges do more than just pass judgment. They take the role of mentor for the contestants who make the cut, working with them on everything from song selection to costuming.

There’s no news on who will replace Cowell on Idol next year, nor
who will sign on as judges for the new show.

“We’re not going to try to find a Simon clone to do what he does, because he’s one of a kind,” Fox chairman Peter Rice said.

With a year before the change, Fox plans to take its time choosing Cowell’s replacement, and promise X-Factor judges will be announced sometime soon. So You Think you can Dance
will likely return to its summer spot.

American Idol premiers January 12 and Simon insists his last season of Idol will rock. “I like the contestants this
year,” he said. “You just get a feeling.”

As to the future, he also promised, “Idol is going to be protected. I genuinely believe that this show can last 20 years.”

Read on for more Simon Cowell