Kristen Stewart, William Hurt, Maria Bello and Eddie Redmayne star in director Udayan Prasad’s The Yellow Handkerchief. SheKnows has your inside look at this love story that arrives in theaters February 26. 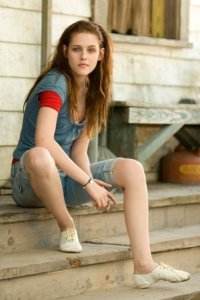 Stewart stars in the story of Martine, a Louisiana girl who invites herself into a convertible with its driver Gordy (Redmayne) quite clueless as to what she wants.

Moments later, Stewart and Redmayne meet Brett (Hurt) — a quiet man recently released from prison. Since Martine is set for a road trip and not too thrilled with driving by herself and Gordy, she invites Brett along, and The Yellow Handkerchief is on its way.

Through their road trip across rural Louisiana, the trio discovers more about themselves and their personal lives than they ever expected.

the Yellow Handkerchief clip: Do You Cry?

The Yellow Handkerchief is a road movie, for sure, but at its heart, it’s all about love. Three solitary strangers may not share generations, but at this moment in time, they truly need each other. This is post Katrina Louisiana, and the last years have been confusing for Brett, Gordy and Martine. By the end of the film and their road trip, perhaps these three lonely souls find much more than camaraderie — perhaps even a second chance at life.