Matthew Broderick is living a Wonderful World. Broderick exclusively shares his insight into his latest film, written and directed by Josh Goldin — an old friend of Broderick — who crafted a role that the actor had been waiting years to tackle. 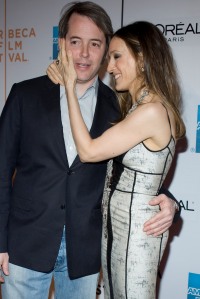 Broderick’s performance in Wonderful World is equally heartfelt, compelling and a further revelation of the immense talent the world
first discovered in Neil Simon’s Max Dugan Returns in 1983.

Sure, Broderick electrified a generation with Ferris Bueller’s Day Off, but
it is the actor’s performances in his second film, War Games, through the Oscar-winning Glory, The Cable Guy and the Broadway to blockbuster The
Producers.

He is famously married to Sarah Jessica Parker and together the couple have three children — seven-year-old James Wilkie and twins Marion
Loretta Elwell and Tabitha Hodge.

Broderick plays a single father in Wonderful World and related that the film is the type of work that reminds him why he first got into acting — for the challenge. The Matthew Broderick
in Wonderful World is unlike any audiences have known in the brilliant Election, The Lion King or Biloxi Blues.

SheKnows: Thanks for taking a few moments to talk about Wonderful World. First of all, what a great title! What was it
that first attracted you to playing ‘Ben’, is it the children’s song writer aspect, because that was really intriguing.

Matthew Broderick: Well, partly, yes. I have a son who is now seven, but he was just at the age where I was hearing a lot of kids’ music when the script first came, so I guess that
was interesting to me. Then there was Dan Zanes, who wrote the music and is actually in the movie, I am a big fan of his. Josh Golden, who wrote and directed the movie, is also a very good friend
of mine. We’ve been friends for 20 years. That was what initially what had me interested was the chance to work with Josh. And, luckily, I liked the script so I didn’t have to pretend!

SheKnows: Fake it for a friend — had you had a chance to work with him before that?

Matthew Broderick: Actually, we met on a film that he and his brother wrote, that didn’t turn out very well a long, long time ago. When it came out, it was called ‘Out on a Limb’.
That’s how we met. For some reason, even though we had this dreadful experience together, we stayed friends ever since. It was nice to finally get a chance to work together again.

SheKnows: You mentioned Dan Zanes and having him on the soundtrack and around the filmmaking process. How did that enhance the experience for capturing the character? 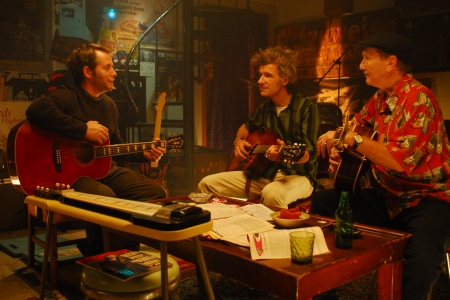 Matthew Broderick: I think it was a major part of it. I think the music that he wrote is a lot of the feeling of the movie. Having him around, just subtlety was helpful to me. Even
though the character I play is not at all based on him, but to have somebody who really did make a living through music and loved it around, in a subtle way, was really helpful to me. And I liked
getting to know him a little bit.

SheKnows: Do you have any musical background? Obviously, you can sing like no other, but the guitar in particular?

Matthew Broderick: I played the cello when I was a teenager, and I’ve been in a few musicals. I like music a lot, but I don’t have much of a background and I couldn’t even fake
playing a guitar!

SheKnows: Well, it was seamless; I could’ve sworn it was you! This film also is quite a timely piece as well, with a single father and the complexities of our lives today. How do
you think it relates to today’s audiences?

Matthew Broderick: Well, I don’t know. I think a lot of people feel lonely; I don’t know how it relates to today. I guess somebody today was saying that no one is comfortable or
has no loyalty to their work because you just get fired. I guess that kind of thing is happening a lot. A lot of people feel isolated now, I guess more and more with computers, people are getting
more separated, which, I think, is what has happened to him. 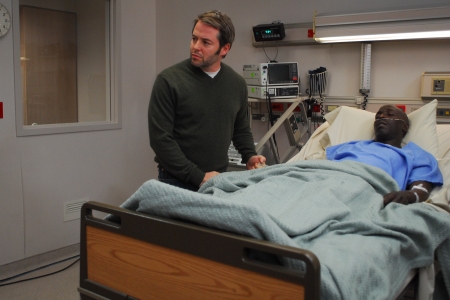 SheKnows: Which is kind of ironic because they’re supposed to bring us together.

Matthew Broderick: I don’t know, I guess they do; these questions are too complicated for a simple entertainer! But yes, they’re supposed to bring us together, but I don’t know
that they do.

SheKnows: You mentioned being friends with Josh. Sometimes that can be a great thing on a set, and not such a great thing, but what was it for you having that personal experience
with him as the director?

Matthew Broderick: You’re right, it was good, but it could be bad because it’s hard to tell a friend if you don’t agree with them. You want to make sure that you’re not just being
nice to each other, or not nice, certainly. But Josh was, luckily, extremely prepared and he was the same person who I know and like when he was directing. His personality didn’t change. We had a
very easy time communicating. We lived at the same housing place where we were shooting; we were just down the hall from each other. We would have a drink usually at the end of every night, so we
always stayed very much friends. It just made it a real pleasure to be in Shreveport.

SheKnows: Sounds like it was an experience you would revisit.

Matthew Broderick: Anytime! He’s such a mensch and he’s a good writer, it’s such a pleasure to have friends like that.

SheKnows: In three years of writing at SheKnows, I’ve never heard someone use the word ‘mensch’! I’m thrilled and feel like I’m at home! — In some ways, the central character in
this movie is your roommate, played by Michael. What was it like working with Michael both on screen and off?

Matthew Broderick: We had it very easy. He’s very friendly and he really enjoys acting, and that was infectious. It was a total pleasure. He said that when Josh first asked him to
read the script, and then when he heard he was committing to do the movie with me, he thought he was kidding because we do such different types of films, I guess. He was doing this accent, and he
still has this tremendous ease about him. I think he’s a very special actor. We did get to hang out some nights in Shreveport; we would all go out together and have a very good time. He’s very
special, that guy.

SheKnows: I have to ask about the Tale of Despereaux, I have to say that the drawing of that mouse is the cutest mouse of all time, no offense to Mickey.  What was it
like doing the voice-over work on that film for you? Matthew, you rock voice-over from Lion King to Bee Movie!

Matthew Broderick: Despereaux was good. It’s very peculiar, you know, you’re usually just alone in a room behind glass, with a bunch of people telling you how to do
it. You don’t work with the other people too much, so it was peculiar kind of work, but I like it. That was a good script, and I enjoy animated films. I’ve always liked watching them, and I love
being in them, I’ve done three or four. It’s very interesting. It’s not the most, possibly fulfilling kind of work for me, but I enjoy it, and I love when I see the results.

SheKnows: Lastly for you, what’s next on the horizon? I see Margaret sounds like quite the film!

Matthew Broderick: Margaret will hopefully come out soon. Next is a play I did called Starry Messenger that I just finished with the same person who wrote
Margaret, Kenny Lonergan, wrote that play. It sounds like we’re going to do it in London in the spring, so that’s probably next for me!

Read on for more Matthew Broderick