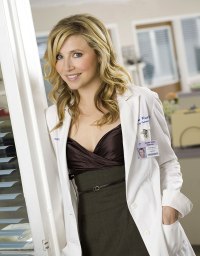 The couple, who have been engaged since December 2006 and together since 2003, kept the baby news private for a few weeks before making the big announcement that Charlie Rhodes Afifi had arrived on
December 24.

This is the first baby for Chalke, 33, and entertainment attorney Afifi, who are both Canadian born.

The pregnancy was announced back in August and as Scrubs fans know, Chalke’s baby bump was written into story, with her wacky character Elliot now expecting hubby JD’s (Zach Braff) baby. In tonight’s episode, Our Stuff Gets Real, the couple start to deal with the realities of the coming addition, with JD
accepting that maybe it’s finally time to grow up — easier said than done!

Chalke has been on Scrubs since 2001, when the show was still on NBC. These days, with the show on ABC, the original cast members are actually working less while a new crop of cast members
is getting its bearings. That extra time will certainly come in handy for the new mom!

Meanwhile, with Elliot still carrying, Chalke will have to start wearing a pregnancy pad when she does come into work. That should take some pressure off, in terms of fighting the baby weight in
front of the camera.

For the record, this is the second Scrubs baby to arrive in the last few months: Alum Jude Reyes (Carla) had a girl back in November. Congrats to all the new parents!