Josh Duhamel, star of the new film When In Rome, surprised his wife, Fergie, by renewing their wedding vows the night before their first wedding anniversary. 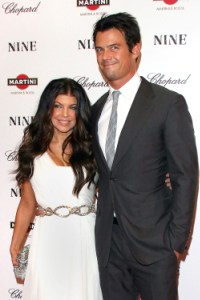 As
Fergie and Duhamel said their “I do’s” a second time, Duhamel told E! News, “It’s always fun to
surprise her and do things she doesn’t know are coming.”

The couple flew from Los Angeles to Santa Barbara to renew their vows in a private ocean ceremony for 15 minutes and then hopped on a helicopter to enjoy coastal views. Fergie was reportedly crying and very emotional.

Afterwards, the couple had a romantic dinner at the Bacara Resort and Spa’s restaurant, Miro. Apparently they had the entire restaurant to themselves and left before the first customers
arrived for the evening. After their dinner, Fergie and Josh drove back to Los Angeles

As for the inspiration behind the romantic night? Josh was inspired by annual vow renewals of Heidi Klum and Seal. When Fergie heard about the tradition, she simply loved it. Timing couldn’t have been better as the couple has been in the news lately.

The Black Eyed Peas singer and Transformers actor first said their vows on January 10, 2009 which unfortunately led to a rough year of wedded bliss in the news. In November their marriage
was put to the test when a stripper in Atlanta claimed she had a relationship with Josh. He denied allegations and Fergie denied to comment. And on New Year’s Eve, the couple shared a kiss in
Miami which perhaps dismissed naysayers out there about the status of their marriage.

Read on for more Fergie and Josh Duhamel

Did Josh Duhamel cheat on Fergie?