Is New Moon star Taylor Lautner dead? First was Brittany Murphy. Next up? Casey Johnson and the attempted suicide of comedian Artie Lange. As young starlets and socialites passed away before their prime, it may have been conceivable to believe rumors circulating that Twilight hunk Lautner had died as well. Fortunately, they were just that: rumors. Taylor Lautner is alive and well. 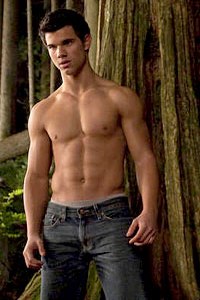 In this day and age of the
internet it’s hard to determine where exactly the Taylor Lautner dead rumors began. For starters, the conversation about Lautner
circulated like a whirlwind on Twitter and then independent blogs started reporting it. That’s when you know a rumor has not been escalated to fact: as news sites did not report his death and
only blogs and Twitterville, one may begin to speculate about the truth to the rumor of Jacob Black from Twilight.

Questions emerged on sites like Yahoo! Answers such as, “So, is Taylor Lautner really dead?”

The faux report mentioned the heartthrob died following alleged drug-related cardiac arrhythmia and speculation around the cause was due to a cocaine overdose.

We’re here to set the record straight: this story is oh-so-false! In fact, false reporting about a celebrity death, especially on a quiet Sunday is nothing new for the internet. You may
recall other faux reports relating to Miley Cyrus or Lil Kim.

While rumors have been circulating that he and Taylor Swift have officially broken up, the actor who gained approximately 30 pounds for his role in New Moon reports are emerging that
he may star alongside Tom Cruise in the new movie, Northern Lights. Lautner will possibly play a young pilot and Tom will play his father. The film is about four young pilots who compete
to become the world’s best.

It’s no surprise that big time roles are pouring in for the actor who recently picked up the Best Breakthrough Actor award at the People’s Choice Awards in Los Angeles. Money should come along with the fame, too as he will reportedly earn $7.5 million if he snags the role.