Susan Boyle’s triple platinum I Dreamed a Dream, was breaking records before it even dropped on November 23, 2009 with pre-order sales. Boyle and I Dreamed a Dream show no sign of slowing in 2010 hitting number one for a sixth week in a row while being declared 2009’s top album! 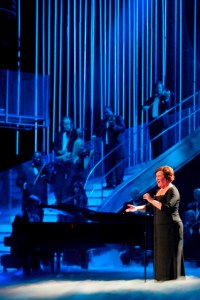 Boyle’s debut album I
Dreamed a Dream was the biggest selling release of 2009 and still holds the number one spot on the Billboard 200, making this six consecutive weeks at the top, with 136,000 copies sold this
week and a total of 3.1 million copies sold to date. Wow!!

Of course, Boyle has been breaking records and boundaries since she first shocked judges on Britain’s Got Talent, reminding Simon Cowell and the rest of the world not to judge a book
by its cover.

Her Britain’s Got Talent performance of I Dreamed a Dream became YouTube’s most watched video of 2009 and since her sound went viral, she’s nabbed 300 Million YouTube hits and
nearly two million Facebook friends.

Boyle hit the studio last summer, recording covers like The Rolling Stones’ Wild Horses, Madonna’s You’ll See and The Monkees’ Daydream Believer, as well as the original
track Who I Was Born To Be; and her much anticipated album became the largest CD pre-order in the history of the Amazon.com Music Store, QVC and Barnes and Noble Online.

There were more records to come after I Dreamed a Dream actually dropped. Boyle is now the first artist in the Billboard 200’s 53-year
chart history to enter the list at number one with a debut album and spend six consecutive weeks at the summit, not to mention the only 2009 release to hold the number one spot
consecutively for six weeks. She also had the largest-ever debut for a female artist on the Billboard 200 in the Soundscan era and the fastest selling global female debut.

SheKnows congratulates Boyle on making her Dream come true – and then some!