Chuck is back January 10 with a serious upgrade, but as anyone with a computer knows, no upgrade comes without its share of glitches. 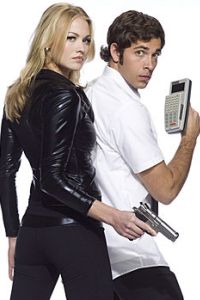 At the end of last season,
Chuck Bartowski (Zachary Levi) uploaded the new, improved Intersect and when we catch up with him, he’s knee deep is spy action. In addition to all the factoids he’s used to having access to,
version 2.0 gives him a physical dexterity any spy would kill for — literally!

Unfortunately, Chuck can’t manage to control the new Intersect and gets kicked out of spy school. Even worse, while he’d planned to run off
with Sarah last season, things haven’t worked out for them.

Feeling very much a failure, Chuck finds himself back home with Ellie and Captain Awesome (Sarah Lancaster and Ryan McPartlin) and falls into a serious funk. Not sure what to do, Ellie and Awesome
call in the big gun: Chuck’s best pal Morgan — who’s been off at Benihana School in Hawaii.

Chuck eventually gets up off the couch, but the road back to spy-dom isn’t easy, and getting over Sarah proves to be even harder.

All the regulars are back for the two-episode premiere, airing January 10 at 9 pm on NBC with guest stars Vinnie Jones (Snatch) showing up in the second hour.

Then on Monday at 8 pm, Chuck assumes its regular timeslot with a third episode, which stars Armand Assante and features Awesome trying to get in on the action.

read on for more Tv news