As the saying goes, women like bad boys, so in Youth in Revolt, Michael Cera’s dorky Nick creates a bad boy alter ego to nab the girl of his dreams.

Based on CD Payne’s successful mid-’90s coming-of-age comic novel Youth in Revolt: The Journals of Nick Twisp, the Michael Cera
vehicle is about a polite, smart little virgin who is obsessed with sex, but not likely to get any soon. 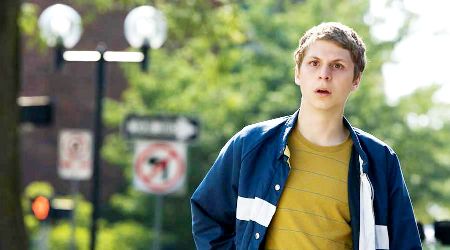 When Jerry ends up on the lam, he takes Nick and Estelle for a trailer park “vacation” and there Nick sets his sights on Sheeni (Portia Doubleday).

The beautiful local is complicated and mischievous, with a love of all things French. She’s a bit wrapped up in hunky, poetry-writing Trent (Jonathan B Wright), but Nick might just have a chance
with her.

Faced with the prospect of returning home and the realization that bad boys get further, Nick decides to help his odds by shedding the good boy and embracing the bad. To that end, he creates
mustached alter-ego Francois Dillinger (also played by Cera), who is cold, calculating, and deceptive. With a deep contempt for authority, he’s prone to smoking and destroying property, all while
sharing the screen Nick.

This new side of Nick may succeed in landing Sheeni, but he goes so overboard he also attracts the law, making the once good boy a wanted criminal and sending the story into overdrive.

The flick, which has gotten mixed reviews, promises to show another side of Cera, whose known for playing softies like his
characters in Superbad, Juno and Nick and Norah’s Infinite Playlist.

Youth in Revolt has been out in limited release, with scattered midnight showings, but will go into wide release January 8, 2010.

Read on for more movie news

Michael Cera gives us his must Playlist