Ghost Whisperer turns on the radio for its first new episode of the New Year. 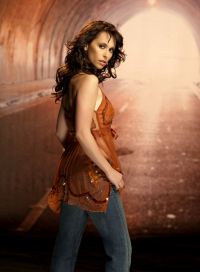 In an episode called Dead Air, a ghost haunts the Rockland University radio station where Ned
(Christoph Sanders) works with a few of his buddies. Their prank-tastic show is all about the laughs, until a sketch from the past shows up in the scripts again.

The guys follow the script and sparks start flying — literally! It turns out the first time the prank was used, it resulted in someone’s death and what starts with the broadcasting of
embarrassing little secrets turns deadly as the unseen ghost exacts revenge.

“The thing that would surprise everyone in this episode is Ned [is] branching out on his own,” Sanders previews in a CBS video-log. “A lot of what goes on is something that he’s taking care of.
He’s getting help from Melinda (Jennifer Love Hewitt), Delia (Camryn Manheim) and everybody, but it’s not based around something that’s
happened to them. It’s something that happened to Ned. It’s something in his life and mistakes he’s made and he’s having to fix. It’s more focused inward.”

After Ghost Whisperer, the ghost-fest continues with Medium and the hunt is on for a serial killer. When the prime suspect (guest star Pablo Schreiber from The Wire)
dies, his ghost contacts Allison (Patricia Arquette) to clear his name, contact his girlfriend and maybe help the police nab the real bad guy, who is targeting innocent women. Meanwhile, Joe gets
into a different sort of jam when his boss asks him to critique his new novel.

The double feature starts with Ghost Whisperer at 8 pm on CBS.

Read on for more Ghost Whisperer