Mariah Carey gave a long, rambling and what some thought was inebriated acceptance speech at the Palm Springs International Film Festival. 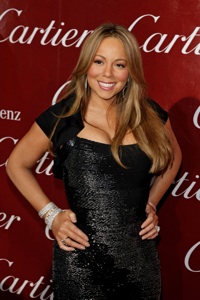 The giggling diva was named Breakthrough Actress for her
performance as a dumpy social worker in the film Precious: Based on the Novel Push by Sapphire.

A teetering Mariah was escorted to the stage, where she bear hugged and proceeded to slow dance with Precious director Lee Daniels. She slowly began her acceptance speech — which she clearly did
not think she would need to give — with a sigh and the words, “Please forgive me, because I’m a little bit, um…”

An audience member finished her sentence with an obscenity meaning flat-out sloshed.

The singer spent the next several minutes rambling about the first time she read the novel Push, meeting the author, and meeting Helen Mirren (who turned down the role that ended up going
to Mariah).

While praising Daniels’ work, Carey burst into spontaneous applause and said “Sorry. Sometimes I get a little…” Stopping cold, she snapped her fingers. “…you know. Difficult.” Cue more
giggling.

Mariah wasn’t done yet. She then launched into a story about how Daniels uglied her up, but couldn’t remember the words for taking makeup off. When Daniels helpfully supplied the phrase, Mariah
snapped, “You could take my makeup off and I don’t look like that (expletive) from the thing,” referring to her decidedly plain and undivafied character.

The audience tried to gracefully applaud Mariah off the stage a full minute before she and Daniels, who to his credit didn’t leave her alone up there to take the ridicule alone, but Mariah does things her way. When she finally finished, she said in a world-weary tone, “I thank you all for all listening to my little spiel, and
god bless you.”

The incident had shades of Mariah’s infamous MTV TRL appearance years ago, when she appeared on the soundstage unannounced, pushing an ice cream cart, handing out popsicles and babbling
similar crazy talk as this awards show? To whit, “All I know is I just want one day off when I can go swimming and look at rainbows and like eat ice cream. And maybe like learn how to ride a
bicycle.”

She checked herself into the looney bin a few days later.

Is Mariah heading for another breakdown or is this merely a case of too much champagne?